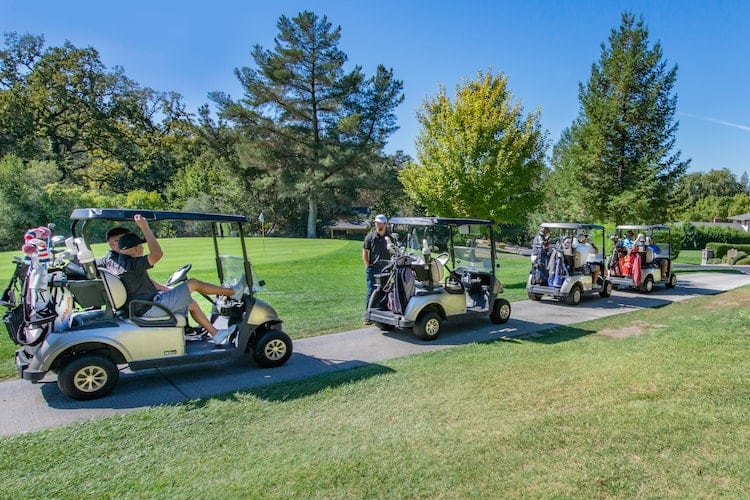 Many folks assume that you can’t play any fun golf games unless you have an even number of players.

For that reason, most people will limit their golf groups to either 2 or 4 people. However, as you’ll soon discover in this article, that isn’t necessary.

A foursome may be the most common grouping on the golf course, but there are tons of fantastic games that can be played with 5 golfers. Let’s look at some of the best five-person games for your next round of golf.

After trying out a few of these fun games, you’ll find that there’s just something special about playing golf in a team format.

Here’s a fantastic golf game for 5 players, and it’s a great way to get some added exercise. As the game’s name implies, only 2 carts can be driven. This means that there are only enough seats for 4 golfers.

All 5 players will tee off on the first hole and abide by regular stroke play rules. Each golfer plays their own ball and adds up their shots. At the end of the hole, the golfer with the highest number of strokes has to walk the next hole.

This game is loads of fun because the other 4 players get to comfortably ride in the carts and crack jokes at the loser who has to walk. However, the loser can get a seat back in one of the carts on the next hole if they don’t shoot the highest net score again. This game is easy to play, and everyone will enjoy it.

We wrote an in-depth piece on how to play Wolf and how much fun it can be for larger groups of golfers. Wolf is possibly the most popular golf gambling game on the planet because the stakes can be whatever the group decides. Here’s how it works:

Gather near the first tee box to decide who gets to be the wolf on the first hole. The easiest way to do this is to spin a tee until the rotation of play is established. Each player will take turns being the wolf.

The advantage of being the wolf is that you can decide whether you want to play with a teammate or as the lone wolf. If the team format is chosen, each team will play a best ball scramble after each golfer has hit their tee shots. The wolf also gets the privilege of being the first player to tee off on that hole.

After the wolf hits their tee ball, he can announce that he’s the lone wolf or wait until others hit their tee shots. However, if the wolf wants to team up with another golfer, he must announce it directly after their tee shot.

If the lone wolf wins the hole, they get 2 points instead of just one. The other 4 players get 1 point each if the lone wolf loses the hole. If the team format is chosen, each player on the winning team receives one point at the end of the hole.

Another great thing about Wolf is that there are a ton of variations, which means that golfers will never get bored with it. For example, players can agree to play for a set amount or change their bets on each hole.

Want a golf game that keeps things fresh and is never dull? Round Robin is an excellent choice for a group of 5 golfers because the matchups change every 3 or every 6 holes. This keeps one team from dominating the entire round of golf.

When playing Round Robin, the format is that a team of 3 golfers takes on the other 2. Once either 3 or 6 holes have been played, the rotation changes, and the golfers must re-pair.

Need help deciding who to re-pair with? Golfers can take turns spinning a tee (just like in Wolf). Whichever person the tee points to is your partner.

Golfers can also toss golf balls toward a target and decide the groups based on the closest golf balls. In Round Robin, each golfer should keep up with their own score and how many matches they won. The winner is whoever won the most matches at the end of the round.

This game is perfect for beginners, those with high handicaps, or a group that just wants to have a good time. The beauty of the Best Ball Scramble is that everyone is on the same team! On a side note, I might’ve given up learning how to play golf if not for this game.

In Best Ball Scramble, each golfer hits their own ball off the tee. The players will then decide which person had the best drive, and everyone will hit their second shot from that position. The rotation continues until the hole is completed.

Once the hole is finished, the team of 5 records its score. Best Ball Scramble is one of the most fun golf games out there, and it’s even more enjoyable with a few adult beverages.

If one team beats the other pretty badly, you can switch the teams up after 9 holes have been played. The goal is to make things as fun and competitive as possible.

This game is a favorite of scratch golfers or those with low handicaps. Instead of traditional stroke play, Stableford follows its own unique scoring system. An albatross is worth 5 points, eagles score you 4, birdies count as 3, pars count as 2, and a bogey gets you 1 point.

Double bogeys, or worse, don’t come with any points. A nice thing about Stableford is that it doesn’t penalize a golfer too severely after a bad hole. They simply won’t get any points for that hole.

When playing Stableford, the player with the highest score wins instead of the lowest, like in regular stroke play. Another cool thing about Stableford is that it works well for a group of 5 golfers. Golfers can decide before the round if they want to team up with a 2 vs. 3 format or play every golfer for themselves.

Here’s another outstanding golf game for larger groups. Tear up a sheet of paper into 5 pieces and number each piece 1 through 5. Have each golfer draw out a number.

The rotation of the teams depends on the number you draw. Numbers 1 and 4 will face off against Numbers 2 and 3. The one who draws Number 5 is a wild card, and they must switch teams every 3 holes.

Each team will play a best-ball scramble. This is a neat feature of Captain’s Choice because the Number 5 golfer can help both teams quite a bit. Each player should keep their own scorecard to determine if the Number 5 golfer belongs to the winning or losing team.

After half the round is completed, the golfers can vote on whether they want to change up the teams or keep them the same for another 9 holes.

Not a lot of golfers have heard of Ghost, and no were aren’t talking about the classic movie with Patrick Swayze and Demi Moore. Ghost is the perfect solution for any group of golfers with an odd number. The ghost is an imaginary player who plays on the team with the least number of players.

Before you get all weirded out and think that Ghost is just an imaginary game for kid golfers, let us explain. If a group of 5 golfers wants to play a team match, they’ll split up as 3 vs. 2. The ghost will play on the team with only 2 golfers.

Here’s the dirty little secret about the ghost: he’s a scratch golfer that shoots par on every hole. That means that whichever team the ghost plays on can do no worse than par! Each team will play a best-ball scramble, record their scores, and the ghost can give handicap strokes on certain holes.

A lot of folks like Ghost because it can easily be played with match play or stroke play rules. The team who plays with the ghost can let it all hang out and take greater risks. This can lead to some incredibly good or incredibly bad shots, which will lead to lots of laughs on the golf course.