15 Insanely Fun Golf Drinking Games For You & Your Friends 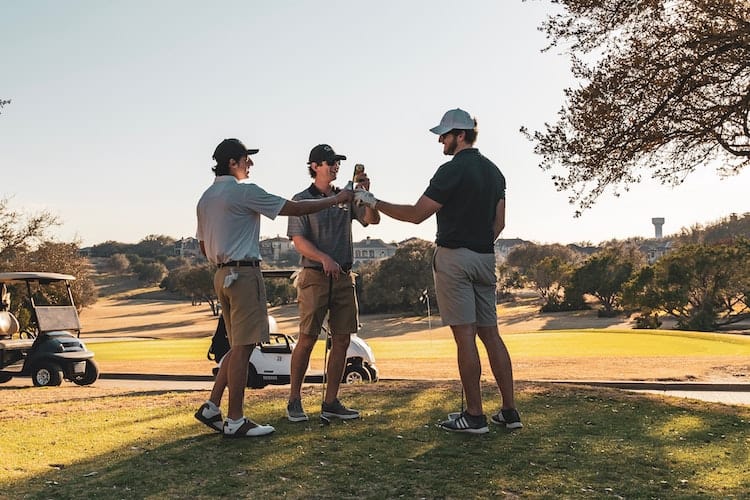 Playing golf and drinking alcohol go together like peanut butter and jelly.

While the game of golf must be respected at all times, there’s nothing wrong with having a few drinks on the course with your friends. Many golfers find they shoot lower scores and have more fun after a few sips of their favorite adult beverages.

Not sure what type of drinking game to play with your buddies during your next round? We can help with that! Here are 15 insanely fun drinking games to try with your friends the next time you hit the links.

1. Your Beer Stays In Your Hand

Here’s a fun game that is easy to play, with only one rule! Each golfer must hold a beer in their hand on the course. The rule doesn’t apply when the golfer is hitting a shot.

Any time a golfer is caught without a beer in their hand, the penalty is they have to chug an entire beer. This rule can be modified if you like to where the punishment is only three-second gulps. After all, you never want to be completely wasted after only a few holes.

2. For Every Mulligan, Take a Shot of Liquor

Let’s face it, we all need to take a few mulligans on the course from time to time. This drinking game will add a little spice and hilarity to the process. Any time a golfer in the group opts to take a mulligan, they also have to take a shot of liquor or down a beer.

Beer bogey is one of the most popular drinking games on the golf course, and it’s been around for quite a while. We’ll show you how it works.

Each golfer in the group adds up their score after each hole. You must take a sip, shot, or gulp for every stroke over par.

So, just to clarify, that means a bogey equals one drink, and a double bogey equals two drinks! If your group is filled with lots of high handicappers, it’s probably best to go with sips instead of shots or gulps! Otherwise, those quadruple bogeys will get every person in the group wasted way too quickly!

This one is simple, but it’ll add some enjoyment to those dreaded bunker shots. Each time your golf ball lands in a bunker, you must take a shot or a sip. So, you must take three drinks if it takes three attempts to get out of a bunker.

5. Closest to the Pin

Here’s a great golf drinking game for all of the par 3 holes on the course. After every golfer hits their tee shot, determine which one is closest to the pin. Every other golfer in the group has to take a shot.

You can also opt to play a different version of this game on par 3 holes. Every golfer that doesn’t wind up on the green with their tee shot has to take a drink. That’ll make folks want to dial in their iron game a little more.

This one is just like the sand trap drinking game but for water hazards. Every time a golfer winds up in the water, they have to take a drink. At least the drink will help ease the pain of losing yet another golf ball!

Every time a player in the group makes a birdie, the rest of the group has to take a drink! If you happen to be the best golfer in your group, it’ll be fun watching your buddies get a little woozy!

If you play in a group with lots of talented golfers, you could change to the Eagle Game instead. In that case, other golfers would have to drink when someone makes an eagle.

Here’s another golf drinking game that is simple and fun to play with larger groups. After every golfer hits their tee shot, the ones who didn’t end up in the fairway have to take a drink.

This game makes everyone focus on hitting the ball straighter instead of farther. It’ll also increase the number of drinks for each person because even the best golfers sometimes miss the fairway.

This golf drinking game has nothing to do with the scorecard. Before a round of golf, players randomly decide on an even or odd number. Once that is determined, each golfer will take a shot or drink a beer on every even or odd hole.

Keep in mind that this game works best with shot glasses, so keep a few in your bag in case other players don’t bring their own. If a player drinks beer instead of liquor, they must finish their beer before that hole is completed. The punishment for not finishing the beer is that they must drink two on the next hole.

Here’s a creative way to make your golf game more interesting. In this drinking game, each person in the group gets to deduct one stroke for each drink they consume. Be careful, though, because the ball gets much harder to hit after a number of drinks!

Hole-in-ones don’t happen often, but they must be celebrated when they do. If anyone in the group scores an ace, every golfer has to take a shot or shotgun a beer. Also, make a picture of the golfer with the flag stick because a hole-in-one is a monumental achievement.

Knocking a chip shot into the hole from the fringe, fairway, or rough is an incredible feeling. With this drinking game, every time a player chips in, the rest of the group has to take a drink. This may give golfers some extra motivation to work on their chip shots.

Each closer set of tees means an additional drink. Want to tee off from the ladies’ tees on that long par 5 hole? You’ll need to finish three beers or shots before doing so.

Here’s another fun game that works well on par 3 holes. After each golfer hits their tee shot, determine who is farthest away from the pin. That person has to buy the next round of drinks. This drinking game can be played on any hole, but it’s easiest on par 3s because it’s simple to see who is farthest away.