How to Play Wolf (The Golf Game) & Tips to Win 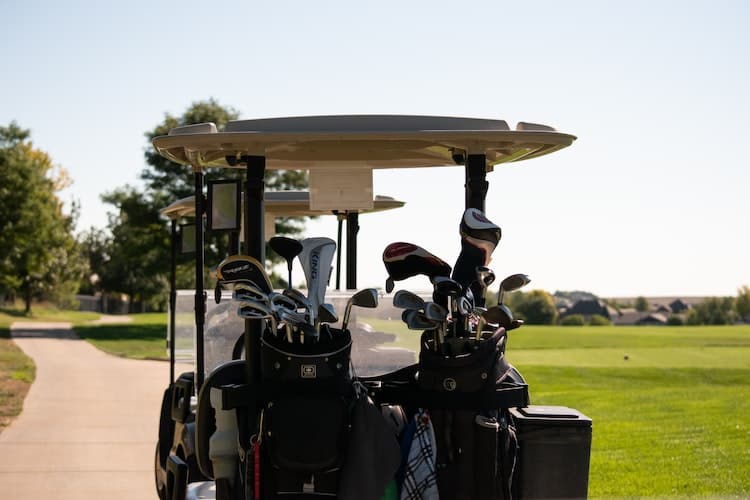 One of the best things about playing golf with a group of buddies is the fun betting games you can play against each other. One of the most entertaining golf games is Wolf, which can be a refreshing break from standard stroke play.

If you’ve never played Wolf before, you’re in for a treat! Let’s go over the rules and basic strategies of this incredible game.

How to Play The Wolf Golf Game

Wolf is a type of match play where each hole is worth a set amount of points or dollars. Because of this type of scorekeeping, no person or team is ever really out of the match. There are many variations of Wolf, but let’s cover the basic rules first.

Line up your crew on the first tee box and toss a tee into the air. Whichever golfer it points to gets to be the wolf on the first hole. Continue throwing the tee until the rotation is set. This will remain the same until the end of the round.

2. The Wolf Tees Off

After hitting his tee shot, the first player gets to decide if he wants to play as the lone wolf or with a wolf partner. If he chooses the partner route, he’ll then watch the second golfer tee off.

After that shot is completed, the wolf must decide whether to partner with that person or to pass and watch the third player hit. If the wolf doesn’t like the tee shot of the third player, he’s automatically paired with the fourth player.

3. If Partner Format is Chosen, Each Team Plays Their Best Ball

You know what Best Ball means if you’ve ever played in a golf scramble. If not, it simply means that you and your teammate will hit your shots and play whichever ball is the best.

4. The Team or Player With the Lowest Score Wins the Hole

So, if Team 1 scores a 3 on the hole and Team 2 scores a 4, Team 1 is declared the winner, and each player will receive 1 point. No points are awarded if there is a tie, whether in team format or lone wolf format.

5. Lone Wolf Holes Are Worth Triple

Now, before you get cocky and choose to go lone wolf each time you can, remember that each lone wolf hole is worth triple the points. This means that if the lone wolf wins, he’ll receive 3 points while his other non-wolf partners will get 0.

However, the inverse is also true. If the lone wolf doesn’t win the hole, the other three golfers get 3 points while the wolf gets 0. In other words, going the lone wolf route is a huge gamble.

How Many Players Do You Need to Play Wolf?

The Wolf golf game is typically played with four golfers, but some variations allow for three golfers to play. All that’s needed is a few modifications to the rules. With three golfers, there’s no predetermined order for who’s going to be the wolf.

After all golfers hit their tee shots, the one with the second longest drive automatically becomes the wolf. The other non-wolf partners become the wolf hunters. The rules are slightly different for par 3 holes, however, as the wolf is awarded to the player that is the second closest to the hole.

The team with the lowest net score wins. If the wolf wins, he gets two points, but if the non-wolf golfers win, they get one point each.

Players can also decide if they want the points to carry over in the case of a tie. For example, let’s say the wolf and the wolf hunters tie on the second hole. Those points will carry over to the third hole and make it worth double the amount.

3 Tips to Help You Win at Wolf

Now that you know how to play Wolf, the next step is to learn how to win! We’ve compiled this list of 3 tips to help you win more often at Wolf. If you take these tips to heart, you’ll win more bets on the golf course.

Playing wolf on the golf course is a lot like playing poker at the casino. The golfer who isn’t afraid to take big risks exudes lots of confidence. This can psych out the other golfers in the crew and make them even more nervous.

One way to show confidence is to announce yourself as the blind lone wolf before you even hit your tee shot. This is known by many in the golfing world as the wolf hammer, and it carries a 4x multiplier of points instead of just 3x! This will shake your buddies up and let them know that you aren’t messing around.

2. Team Up with a High Handicapper

This tip only applies if you are playing Wolf with full handicaps involved. When that rule is instilled, it makes a lot of sense to team up with a high handicapper because they’re given at least one stroke per hole.

That means if the high handicapper scores a 5 on a hole, their score is actually recorded as a 4. This can make it easier for you to rack up points, especially if you happen to hit a poor tee shot as the wolf.

3. Don’t Take The Game Too Seriously

This may be the most important tip of all. While there’s nothing wrong with being competitive, remember that Wolf is supposed to be much more fun than regular stroke play. You aren’t playing for millions of dollars like on the PGA Tour, so just lighten up and have a good time out there!