What is a Weak Golf Grip and Is It Better Than Other Grips? 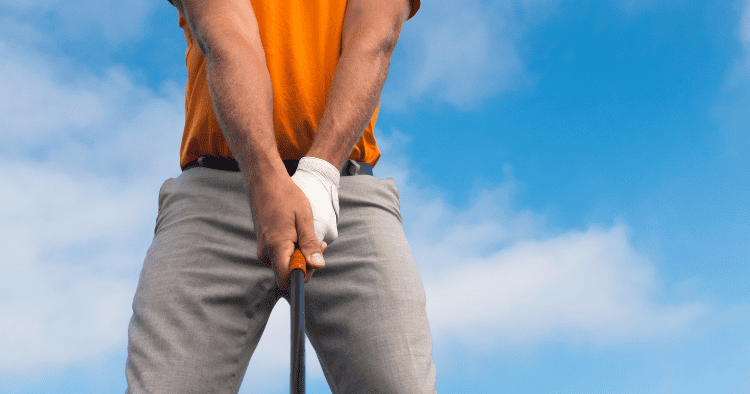 Do you know what a weak golf grip is?

Surprisingly, a weak golf grip has nothing to do with how hard you grip the golf club. When someone says they prefer a weak golf grip, they are referring to the position of their hands on the shaft.

There are several reasons why golfers adopt a weak grip. We describe the pros and cons of the weak grip here along with how it can help your game. After reading this post you will be able to decide if you want to switch to a weak grip for your golf swing.

What is a Weak Golf Grip?

A golfer has a weak golf grip if he or she can only see one knuckle on their left hand while addressing the golf ball. When a right-handed golfer uses a weak golf grip, both the left thumb and right thumb will be pointed toward the left shoulder. 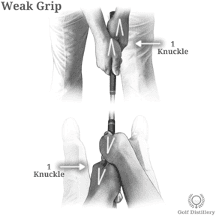 The right hand will rest right on top of the shaft when using a weak grip. Golfers who end up with their shoulders slightly open at impact will benefit from utilizing a weak grip.

Is a Weak Grip Good in Golf?

No golf grip is inherently good or bad. The key is finding a grip that you are comfortable with and one that will enable you to shoot your lowest possible score. There are lots of successful golfers on the PGA Tour with a weak grip.

All three types of golf grips have different types of advantages and disadvantages. The key is to match your swing type with the appropriate golf grip. Here is a list of the pros and cons of the weak grip.

Do you constantly struggle with hooking the golf ball? If so, you may want to try out a weaker golf grip. Lots of golfers who hit the ball too far left can straighten out their shots by switching to a weaker grip.

A large majority of the time, those annoying snap hooks that end up in the trees are caused by having a grip that is too strong. You can try weakening your grip by just one knuckle and see if that solves your hooking problem. Be sure to try these grip changes on the practice range first because undergoing a grip change during an actual round can be a disaster.

A weak grip provides the golfer with more hand and wrist freedom. When this happens, the golfer can more easily rotate their hands through the ball at impact.

When this is done properly, the ball will explode off the tee. This can lead to an increase in distance for some golfers who have impeccable timing.

All golfers would love to be able to hit those towering approach shots that stop on a dime right on the green. A weak golf grip makes it easier to hit the golf ball higher in the air.

This is a huge advantage, especially for golfers that can create lots of backspin on their golf shots. If golfers can get more trajectory and more backspin, it often leads to shooting lower scores.

Con #1: Can Lead to More Slices

The main disadvantage to using a weak grip is that it can increase the number of slices a golfer hits. This happens because a weak grip makes it too easy for the clubface to be too open at impact. The single biggest cause of a slice is an open clubface.

Con #2: May Not Work Well for Most Amateurs

This point goes along with the first one. It is a known fact that most amateur and beginner golfers fight a slice off the tee. For this reason, a weak grip may not be the best option for folks who are just learning to play golf.

Professional Players Who Use a Weak Golf Grip

“Rahmbo” is one of the most popular players on the PGA Tour because of his incredible skill level and ferocious competitive fire. Rahm uses an extremely weak grip and both of his wrists bow at the top of his golf swing.

The weak grip doesn’t hurt Rahm’s driving distance in the least because he has such a strong upper body that he can create plenty of clubhead speed. Rahm ranked 2nd last year on the PGA Tour in strokes gained off the tee. This just goes to show that golfers with a weak grip can still hit the golf ball a long way!

Spieth has one of the weakest grips in professional golf but it works incredibly well for him. The former University of Texas star has won 12 PGA Tour events, three of which were major championships.

After nearly a four-year drought, Spieth finally made it back to the winner’s circle at the 2021 Valero Texas Open. Spieth capped off his season with a runner-up finish at The Open Championship in England.

Mr. Hogan was one of the greatest golfers who ever lived and he is a big reason why the weak grip is still so popular in golf today. “The Hawk” started using the weak grip during pro tournaments in 1949. That single grip change had a profound impact on his professional golf career.

Hogan fought a hook for most of his career before switching to the weak grip. The change paid off handsomely, as Hogan went on to win 64 PGA Tour tournaments (9 majors). Hogan passed away in 1997, but his impact on the game of golf will remain forever.

Who This Grip is Best For

The weak grip is not for everyone, but there are a few folks who will benefit from trying it out. Here is a brief list.

The Other Types of Golf Grips

If you’ve tried the weak grip in the past and don’t feel comfortable with it, give either the strong grip or the neutral grip a shot. Here’s a brief explanation of each below.

Lots of golfers like the strong grip because they feel it gives them extra power in the downswing by increasing their lag. Golfers with fast hips may benefit from switching to a stronger grip.

The neutral golf grip is often used by highly advanced golfers who want to hit a lot of shaped shots like high fades or low draws. Golfers with medium hip speed will usually benefit greatly from using a neutral grip.

With a neutral grip, the golfer will see two knuckles on the left hand and the thumbs will be pointing right at the nose. Lots of golfers find that the neutral grip helps them keep the clubface square at impact. When this happens, a golfer’s accuracy level increases dramatically.