What is a Strong Golf Grip and Can It Improve Your Game? 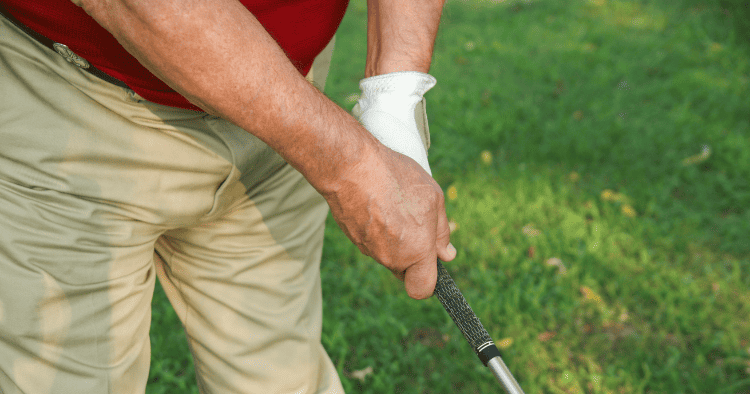 I’ll never forget when I learned what a strong grip was from a golf instructor. During our first lesson, he noticed that most of my golf shots tended to slice to the right. He proceeded to tell me that the simplest fix for my slicing was to start using a strong golf grip.

There are several reasons why golfers should use a strong grip. We describe the strong grip here along with how it can help your game. After reading this you’ll be able to decide if a strong grip may work for you.

What is a Strong Golf Grip?

A strong golf grip has nothing to do with how hard you grip the golf club. Instead, it has to do with the position of your hands. A strong grip requires the golfer’s hands to be rotated away from the target. 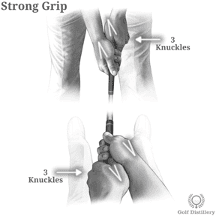 How do you know if your golf grip is already strong? Check the position of your knuckles on your left hand. If you can see three or more knuckles, you are already using a strong grip.

Folks with a strong grip normally use one of two finger patterns: the interlocking grip or the overlapping grip.

Is a Strong Grip Good in Golf?

No golf grip is inherently good or bad. It all depends on what type of golf swing you have. The most important thing is to match your swing type with the correct grip. It’s best to spend lots of practice time using each grip to see which one works best for you.

Just as with the weak and neutral grips, the strong grip has its own set of positives and drawbacks. Here is a brief list of the pros and cons of the strong grip.

Pro #1: Could Lead to Increased Distance off the Tee

Switching to a strong golf grip puts the hands in a more powerful position. This could lead to more yardage off the tee with the driver. The ability to hit the ball further can lead to lower scores on the course.

Pro #2: Helps to Straighten Out Slicers

Most amateur or beginner golfers fight a slice, especially with the larger clubs like the driver, fairway woods, and hybrids. A strong grip helps remedy this common problem. Here’s how:

The strong grip makes it much easier to close the clubface on impact. This is in stark contrast to the weak and neutral grips, which usually make it too easy to hit the ball with an open clubface. The open clubface is what causes the slice.

Pro #3: Promotes an In to Out Swing Path

The strong grip also encourages an in-to-out swing pattern, which not only helps remedy a slice but makes it easier to hit draws. This is because of the aforementioned closed clubface at impact. The ability to hit a draw can be a huge advantage on the golf course, especially on the holes that have a dogleg left shape to them.

Con #1: Can Result in Hooking

For golfers who have no trouble closing the clubface at impact, a strong grip can lead to hooking. This is not a good thing on the course and can result in lots of lost golf balls and frustration. A wicked hook is just as bad as a nasty slice because neither one will end up in the fairway.

While most golfers, especially slicers, may welcome a lower ball flight, that is not the case for all golfers. The closed clubface that the strong grip promotes usually leads to less trajectory. This isn’t such a problem with the longer clubs but it can negatively affect some golfers’ approach shots with wedges.

This one comes down to personal preference, as some golfers think the strong grip is more comfortable than the weak or neutral grips. However, some golfers report that their hands get quite a bit sore after switching to a strong grip. This could be due to the extra wrist rotation that occurs with a strong grip.

Many golfers find the strong grip to be very uncomfortable while chipping and putting. For this reason, lots of golfers will use a strong grip for normal shots but a neutral grip for short game shots.

Professional Players Who Use a Strong Golf Grip

There are tons of golfers on the PGA Tour that use a strong grip. Many of which are some of the game’s biggest stars. This just goes to show that a strong grip is not just for beginner golfers.

DJ is one of the best players in the world and has been for quite some time. Johnson has racked up 24 PGA Tour wins, two of which are major championships. The 37-year old uses one of the strongest grips in pro golf because of his 6-4 frame and very large hands.

The strong grip helps keep Johnson’s hands quiet, which allows for his brute strength and extreme flexibility to pummel the golf ball well over 300 yards. Johnson’s strong grip enables him to keep his connection with the golf club throughout his entire swing.

Though Zach Johnson has no relation to Dustin Johnson, they both employ a strong golf grip. The 45-year old has won 12 times on the PGA Tour, including two major championship titles. What is interesting about Johnson’s grip is that it is even stronger than DJ’s, as both of his thumbs are pointed at his right shoulder.

Johnson may not be one of the longest drivers in pro golf, but he is one of the most accurate. The strong grip and excellent body rotation help Johnson make consistent contact, both off the tee and with his approach shots.

We had to put a lefty on our list and Watson is one of the best out there. The former University of Georgia star has used a strong golf grip his entire career. Watson turned pro in 2002 and has won 12 times on the PGA Tour.

Watson’s greatest achievements are his two victories at The Masters Tournament in Augusta, Georgia. Watson keeps his hands in an extremely strong position, which is pretty uncommon amongst left-handed golfers. Being unconventional has never bothered Watson.

Though he uses an extremely strong grip, Couples only grips the golf club with a small amount of grip pressure. By lightly holding the club, Couples is able to generate his signature smooth swing. This proves that golfers with a strong grip can still have a nice smooth rhythm to their swing.

We can’t mention strong grips without talking about the man with the strongest golf grip of all time. “Zinger” had what is called an ultra-strong grip, which is where you can see all four knuckles on the lead hand. Azinger’s right hand was much more underneath the golf club than most golfers.

The extremely strong grip didn’t hurt Azinger’s career in the least. The Florida State University alum scored 12 wins on the PGA Tour, including the 1993 PGA Championship. Azinger is now one of the most popular commentators on the Golf Channel.

Who This Grip is Best Suited For

Lots of golfers can benefit from trying out a stronger grip. However, a strong grip is not for everyone. Check out the below list for the folks that may benefit the most from a strong grip.

The Other Types of Golf Grips

Have you tried the strong grip in the past and didn’t feel comfortable with it? If that is the case, consider using a weak grip or a neutral grip. Here’s a brief rundown of each of those.

The weak grip is the exact opposite of the strong grip. Instead of both the right thumb and left thumb pointing at the right shoulder, with the weak grip they point at the left shoulder. With a weak grip, the golfer will only see one knuckle on their left hand while addressing the golf ball.

Golfers who love the weak grip claim that it helps them hit the ball a lot higher than the other two grips. PGA Tour pros like Jon Rahm use the weak grip to hit those long, power fade drives. A weak grip normally works well for golfers with slow hips.

The neutral grip is a happy medium between the weak and strong grips. With a neutral grip, the thumbs point right at the golfer’s face instead of either his right or left shoulder. Golfers with a more medium hip speed may benefit the most from a neutral grip.

When using a neutral grip, the golfer will be able to see two knuckles on his left hand during his setup. The neutral grip usually works best for golfers with excellent swing mechanics. PGA Tour legends Jack Nicklaus and Tiger Woods are both big proponents of the neutral golf grip.