The Pros and Cons of an Open Stance Golf Swing 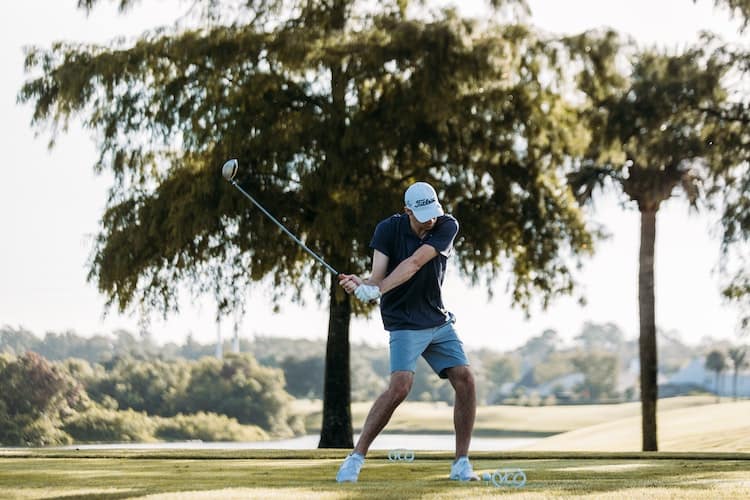 Remember when you were new to the game of golf, and it was nearly impossible to get your feet, and clubface squared and have all parts of the body working together?

Who would have thought that after just a bit of experience in the game, you would go back to these alternative stances with your feet open or closed?

The open stance golf swing can be a tremendous tool for players when it’s done right. The key here is making sure you understand what an open stance is, how to get into an open stance position, and the impact it has on ball flight.

Keep reading – we have the answers you need to give this a try on the range today.

What is an Open Stance Golf Swing

An open stance golf swing is one where your toes are going to be aimed left of your target while your clubface stays square down the target line. With an open stance golf swing, your toes and heels are still on the same parallel line, but they are no longer parallel to your clubface. What this looks like is a golfer with their hips and toe line aimed to the left of the target.

The key to making a proper open stance golf swing is the swing plane. Once your feet are on this path being aimed left of the target, the swing plane is still the same as if the feet were in the center of your stance.

Therefore the swing plane and path will match what the clubface is doing, not what the feet are doing. As you can imagine, this will have an impact on the ball flight, spin, and overall distance of the shot.

Pros of Having an Open Stance in Your Golf Swing

The main positive to hitting a golf shot with an open stance swing and swing path is a higher ball flight. However, in addition to this higher ball flight there are benefits to being able to work the ball and to help players that struggle with rotation in their swing.

When your left foot and right foot are aimed to the left of the target line, the result to the clubface is that it will be slightly open in relation to your stance. The open clubface results in a higher ball flight.

Approach shots to the green are all about hitting it close. At some point in your golf career, you likely realized that getting the ball on the green is not enough. You need to be close enough to make a putt. One way to ensure you can attack pins is to have a higher overall flight with a bit more spin on the ball.

Think about the angle that many of your approach shots land on the green. Are they coming in high, dropping down, and stopping? Or are they scooting across the green like a line drive to center field? The ability to change ball flight and prepare for this softer landing is essential.

Easy Way To Hit A Fade

The draw and fade equation tends to get over complicated. Players worry about changing their grip, adjusting their swing path, and all sorts of other mental tricks to try and get the ball to turn just a few yards. Many great players will open their stance a bit and watch the ball fade.

The open stance promotes a more outside swing path, and with the feet aimed to the left of the target, the result will be a high fade. Don’t feel the need to make this game any more complicated than it is!

If you are starting to feel hip pain or pressure when you swing through the golf ball, chances are the left foot is making things difficult for you. As we age, our flexibility decreases, and so does our power. The result is a move that tries to create power with a less flexible body, and the many golfers end up in pain.

Sometimes by opening the stance just a bit, we make it much easier to swing through the ball, transfer weight and look straight down the fairway at our target. For players that struggle to get to the left side or don’t feel comfortable turning with speed, the open stance is a game changer.

Cons of Having an Open Stance in Your Golf Swing

Like all things in golf, if you make a slight change, there are possibilities for negatives as well. The square stance is where most players like to play, and that is because the golf ball tends to perform best from this position. Here are a few downsides to the open stance, all of which can be controlled by the degree to which you open your stance.

Can Promote a Slice or Fade Spin

The outside-in swing path created by a player who sets up with an open stance has also been known to promote a slice or a fade. For many golfers, this is a great thing, but if you exaggerate this move in any way, expect that your face angle could be a bit too extreme, and the slices and fades can get out of control.

Another one of the disadvantages to the open stance golf swing is a slight loss in the distance. Sometimes with the open face angle and the setup to the left of the target, the shots can be a few yards shorter. With a closed stance and clubface that is slightly shut down, there is more topspin on the ball, increasing the amount of roll and distance.

Ball Will Be Subject To Wind

High ball flight is great until you are into the wind. If you are playing golf on a windy day, opening the stance and increasing the ball flight is likely not your best decision. Instead, learn how to play a closed stance as well as an open, and then you are prepared for any situation.

Can Cause Swing Plane Issues

Golfers with an open stance tend to struggle with where the golf club should come around in the backswing. Sometimes the club gets a bit too far outside the target line, which is difficult to recover from. I’ve said it before, but it’s worth mentioning again that adjustments to the golf swing, like an open stance, should be subtle. Don’t go crazy with this; it’s not going to help you.

Other Types of Stances

In addition to the open stance, there are two other types of stances in golf. We wish we could tell you that learning one will be enough. If you want your game to stall at a certain point and not progress to lower handicap, then you may stick with just a square stance.

However, great players will work hard to add tools to their golf bags. These tools are not necessarily golf clubs; instead, they are shots that can be hit using the equipment you already have.

A square stance is a standard golf stance where your feet, hips, shoulders, and clubface are all square to the target line. With a square stance, you set yourself up for a perfect swing plane and for a high ball flight, and a straight golf shot.

Of course, the square stance will not guarantee that you hit a golf ball straight, but it certainly gives you the best chance. However, each golfer has some unique features to their game, and sometimes even with a square stance, the ball will go left or right.

One of the best fixes for a golfer that is struggling with a slice is to close down their stance and see if it helps straighten the ball flight out. The clubface closes slightly, and the path encourages you to release the golf club.

Which Type of Golf Stance Is Best?

Wouldn’t it be great if there was one type of golf stance that you could learn as a beginner and have that take you throughout your entire golf career? Unfortunately, golf is never that simple.

The square stance is the one you will use the most often. However, once you have the square stance down, it’s time to start looking at the open stance and closed stance as additions to your game. The learning curve on these stance options is short, and you can pick up this skill in one afternoon on the range.

My best tip is to start very subtly. Do not overdo the motion in any way, as it will likely cause a shot that you are not going to favor. Simply start with a slight turn of the toes towards the left and see how this impacts your flight. Chances are you will hit some shots that you have not been able to hit in the past.