Fade vs Slice in Golf: Definition, Causes and Tips to Fix 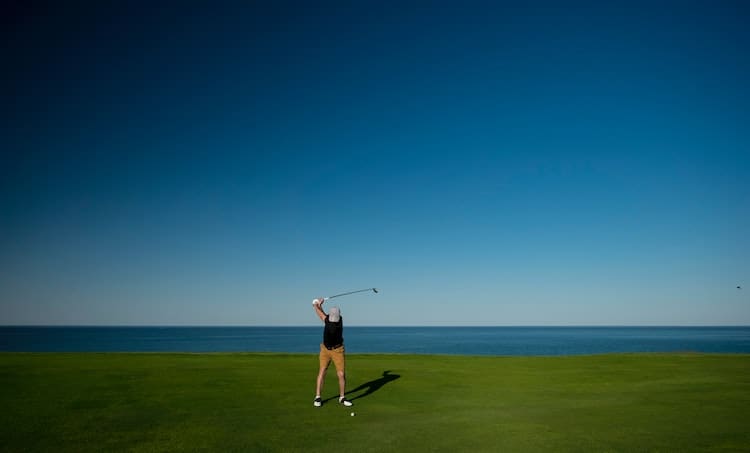 Amateur golfers often struggle with a slice. It leads to the ball starting right of the target and viciously curving further away from where it should be. While you cannot play successfully with a slice, you can optimize your control with a fade.

In this post, I am answering whether it is better to fade or slice. My aim is to teach you the difference and how to fix these shots. Plus, I will offer some guidance on how you can identify what is causing you to fade.

(Those who have no time for a fade or slice golf shot should read our step-by-step formula on how to hit a draw golf shot.)

Fade vs Slice: Understanding the Difference

A fade and slice may look like the same shot to the naked eye. However, despite their similarities in ball-flight, they are different. A fade shot is typically a controlled shot that starts left of the target line and gradually shapes from left to right for right-handers.

A slice shot starts right of the intended target and continues to shape away from it for right-handed golfers. The side spin generated can cause the ball to kick further right and into trouble.

Basically, a fade shot shapes from left to right less than a slice. When you pull off a fade, your club follows a controlled outside-in path. Plus, the ball is sent on a stable flight. Conversely, your golf ball travels right of the target line and continues offline.

The ability to play a controlled power fade can help you escape sticky situations and optimize your distance performance from left to right dog-legs. Tiger Woods is an ideal role model to base your power fade tee shot off. Thanks to this shot, he achieves maximum distance and control on dog-legged holes:

What Causes a Fade?

Although the determining factor in a fade or slice is an open club at impact, several factors prompt this action. The first of which is your grip. Golf Magazine suggests you set up a weak grip if you wish to get the club face open at impact.

Their advice is to position your right hand on the club handle with your palm and rotate your hand to the left until you see two knuckles. Then swing as you normally would, and watch the ball fade.

If you are unintentionally fading the ball, try to gain a firmer grip on the club to generate a draw shape to compensate.

Golf coach Hank Haney conversely explains that if your grip is too tight, you will find it challenging to release through the ball at impact. That leads to you stabbing at the ball instead of following through, causing the ball to slice into oblivion.

The flex of your shaft may cause you to slice your shots. The lack of flex on stiff shafts makes it difficult for slower swingers to produce enough whip on their downswing to get the club-head on plane. Typically, golfers cannot get their clubface square at impact, leaving it open and prompting a fade.

The next factor that causes you to fade your ball is your golf swing path. An out-to-in path causes your clubface to cut across the ball at impact, generating left to right spin, which prompts a fade shape.

If you want to induce a draw vs a fade you need to start your backswing on an inside line. Then, on your downswing, take the clubhead on an outside path.

The ultimate reason you hit a fade is the position of your clubface at impact. When your clubface is open to the club path at impact, your ball will start on a straight line before fading back to the target before descending.

What Causes a Slice?

As with a fade, a weaker grip can prompt a slice. Less control of the club throughout the swing can cause the clubface to open on your downswing and stay in that position through impact.

Before altering any mechanics of your swing to eradicate a slice check if your grip is firm enough. If it is too weak, you will struggle to keep the club on plane.

Those struggling to shake a slice may find that their equipment carries insufficient offset. Using a driver or fairway wood with a high level of offset combats fade side spin and allows for a straighter shot to help you spend more time on the fairway.

When you set up for a controlled fade, your stance is open, and you are aiming to the left of the target to account for the curve at the end. A slice, on the other hand, is not planned. Because it is unplanned, you are generally aiming directly at your target.

That is one of the reasons why the results of a fade are far better than a slice.

The swing path for a sliced shot is the same as a fade. It starts outside and travels on an inside line to impact. That causes the face to cut across the ball and generate a side spin that sends the ball right of your target if you are right-handed.

Clubface Open To The Path

Slicing your shot stems from the same action that causes you to fade your ball, an open clubface at impact. In both circumstances, your clubface is open to the path. That means that the clubhead moves along an out to inline while the face remains open.

Clubface Open To The Target

Is It Better To Fade Or Slice?

A fade is far better than a slice on any day of the year. It follows a more conservative line, curves less violently, and can give you more control. A slice on the other hand is out of control and leaves you powerless.

Simply put, you have no business engaging with a slice. If slices are a recurring problem in your game, consider hiring a coach to help you fix it.

How to Fix a Fade

A firm grip on your golf club is vital to prevent the face from opening at impact. If you feel you have limited control over the club, tighten your grip slightly.

Close your stance for a more flat setup. That means that you will now be aiming parallel to your target and not to the left. Some players automatically aim left because they are used to compensating for the curve.

Putting your body in this position promotes a neutral swing path to help you get the clubface square at impact.

The next area to fix is your club path. A fade is caused by swinging from out to in. This causes the clubface to cut across the ball and generate a sidespin. To prevent any future left to right shape, work on delivering a straighter club path.

If you correct the above areas of your address and swing, you should have the clubface on plane to square up at impact. When you get your clubface square, it encourages straighter ball flight for added accuracy and consistency.

How to Fix a Slice

While we have written a detailed guide on how to fix your slice, I will leave you with a few key points  here to work on.

As with a fade, you should tighten your grip if you find that the club is too loose in your hands. Conversely, if you are gripping it too tight, it can also cause you to stab at your shots, producing a push slice.

You need to eradicate the inside outside-in swing path from your game if you are to fix your slice. Work on sending your club back on a straight route and through along the same line. If you execute this shot your clubface will remain square at impact. As a result, your ball will fly long and straight.

The principal solution to your slice woes is an open clubface at impact. This generates left to right side spin and starts your ball left of the target. Following the above tips help you get your clubface to square up before impact.

Although I recommend improving your grip, club path, and face position at impact, it does no harm to have game improvement equipment. Clubs that feature exaggerated offset are an ideal companion to help you overcome your slice.

Manufacturers offset the hosel to reduce side spin that worsens the outcome of a slice. If you are a high handicapper or beginner, it’s worth considering anti-slice clubs with excellent offset.