How to Chip in Golf: 7 Experts Share Their Top Tips 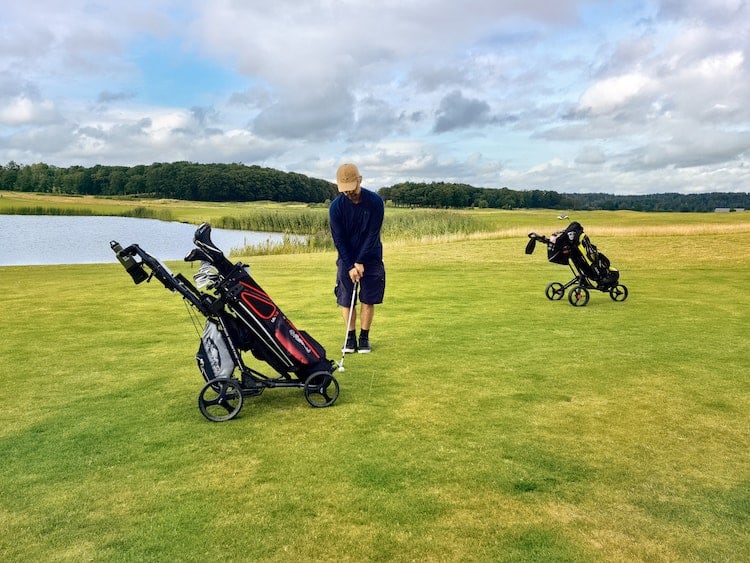 Chipping is my favorite area of the game to practice. When you can get good at chipping, you can save almost any hole.

However, chipping is a real problem for a ton of golfers.

In reality, most golfers overcomplicate the chipping process, and it’s entirely unnecessary.

I gathered some of the best chipping advice around; of course, there is no perfect way to chip. Take a look at some of these options and see if any of them could change the way you approach chipping the next time you play.

Sean Foley is a highly accomplished instructor capable of helping all levels of golfers with their short game and long game. This particular tip is one of our favorites because it talks about the importance of the body in chipping.

So many golfers make the mistake of using their hands and wrists as opposed to the rotation of their bodies. When you take one hand out of the equation and take one handed golf swings, it becomes much easier to get consistent chipping results.

You will notice that when you do the right hand only chipping, your right arm needs to stay stable and maintain its angle. The same goes for the left hand only drill. This video also demonstrates that there is no perfect way to accomplish a chip shot.

Learning various methods will help you improve your performance and become a much better player.

Don’t stick with a one handed drill for too long. It’s best to go back and forth between the one handed drills and your regular shots. In the end, both hands need to work together to hit golf shots, and you won’t want just one to dominate.

Watch The Height Of Your Lead Shoulder (Adam Bazelgette)

One of the biggest mistakes that golfers make is they tilt their body in a way that their front shoulder is pointed high. This makes it difficult for golfers to get through the golf ball; instead, they hit a chunk shot or even blade it a bit.

It’s best to have your shoulder set up a little more square to ensure that you can make the proper approach to the golf ball.

The way that Adam says it is best to do this is to set up as if you are about to hit a chip shot, then hold the club cross handed and then, with little movement in your shoulders or head, put your clubs back on the club correctly.

What this will do is keep your left shoulder a little lower and promote a more solid shot with less flipping or skulling of the chips around the green.

The great thing about this concept of lowering the lead shoulder is that it improves turf interaction and encourages several of the other mistakes in the chipping area to go away. An expert tip here, you may find that this concept even helps with the full swing.

Since many golfers struggle with chipping, they often freeze up and hit poor shots. The first thing that tends to go is any natural movement that they may have in their swings. Therefore it makes sense to listen to this great tip by Clay Ballard to keep momentum in the chipping stroke.

The first step here is to use something like a sand wedge and keep the club face slightly open. Then swing the club so that there is some tempo involved and it is not as rigid of a motion. If you have the ball position and swing path correct, the ball should get up in the air without any issues.

As you watch Clay Ballard hit his chip shots, he shows you that even these shorter chips need to keep this momentum through impact if you are going to make great contact with each of your chips and pitches.

When you watch videos of Tiger Woods hitting some of the best shots around the green, he always looks as though he has a different type of technique or club in his hand. That’s because he does!

Tiger never thought about a chip shot as a singular chip shot. Instead, he looked at this process as being a decision. He had to choose which golf club would make the most sense for his short game and then combine that with the proper stroke.

With most golfers carrying four wedges in their bag, your opportunities to create a variety of golf shots have expanded greatly. You can hit shots with less loft and higher backspin or shots that have a very little spin and roll from the front to the back of the green.

The concept here is that the more prepared you are for the different types of shots you need to hit, the easier it is to be successful on the course.

Another master short game excerpt is Phil Mickelson. Phil does a tremendous job on the flop shots that he hits around the greens, but Phil has more to his game than just these flops. In fact, some of his chipping technique is considered the best in the game because of his consistency.

You can look at some players and notice that they are very methodical and by the book in their chipping. However, when you look at Phil’s short game, there is an artistic element mixed in. He is a bit of an artist around the greens, and the best way to see this is the way he can get himself out of trouble when he’s in a bad spot.

Whether it’s bunker shots, flop shots, or a standard run of the mill chip, Phil Mickelson knows how to get it done.

The two best tips that we get from Phil Mickelson is to keep your weight forward and to push your hands forward.

There is a bit of mixed advice out there about what the hands should be doing. Something that it’s best to keep them in the middle of your stance, but he feels that for more control, your hands should be pushed forward.

We like this technique quite a bit for the golfer that struggles to hit the ground on their chip shots; the forward press will help ensure that this happens for you.

Open Clubface and Use The Body (Mr.Short Game)

The Mr.Short Game videos do a great job of simplifying the importance of an open clubface. Tips in this video initially stemmed from the advice of Bob Vokey, the creator of the Vokey wedge. Certainly, the man knows a thing or two about hitting a great wedge shot.

The key here is to keep your elbows connected more toward your body if you want to ensure consistency. Essentially if you are hitting shorter chips or longer chips, you must ensure that your body stays more connected. When the club gets away from you, that’s when you see the chunk or the shank shots that you must try to avoid.

Opening the clubface also allows for the use of the bounce on the wedge. Bounce is there to be forgiving and can really help when you want to get the full loft out of your shot as well.

Don’t close the clubface down thinking that it will actually be more forgiving; it won’t be! The most forgiving shots you will hit are the ones with the more open clubface, where you take full advantage of the bounce.

I recommend working on this concept on the chipping practice green first and then bringing it out to the course. The open clubface concept takes a few swings to get used to.

Maybe this concept or technique is easy for me because I’m short, but the one thing I’ve always told golfers who struggle with their chipping is that they must think small. You can’t expect to hit a short little shot that lands softly on the green while setting up to hit a large full-swing approach into a hole.

Think small, to hit it small.

The idea here is that your stance, setup, and swing all need to be simplified. Some of the best chips I’ve ever taken in my life are with my feet entirely next to each other. The full stance with your feet shoulder-width apart does not help when chipping.

Essentially you must ensure that you have set your brain up to adjust to this shorter distance shot. The easiest way to do this is by thinking of everything as being a miniature version of the big swing.

Small stance, small swing, choke up on the grip to make the club smaller, and see how this works for your short game. It has always worked for me.