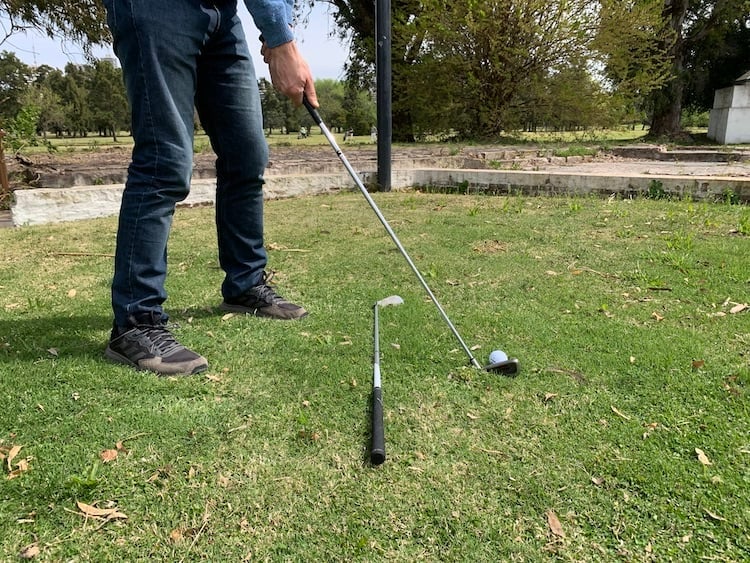 The very first time that I dabbled with the different stances was as a competitive junior golfer, trying to eliminate the natural fade resulting in numerous lost golf balls. Needless to say, my father wasn’t thrilled.

But after some tinkering, I figured out the right stance to improve my game.

So if you’re looking to add another setup to your repertoire, I detail the must-know pros and cons of a closed stance in this post.

I always suggest operating with a neutral stance for optimal posture, balance, and swing mechanics. However, a closed or open stance has its merits, as you will learn in this guide. First, we will look at the advantages and disadvantages of the closed setup before comparing the results to an open or square golf stance.

What is a Closed Stance in Golf?

In simple terms, a closed stance refers to a right-handed golfer who aims to the right of their target line. Naturally, the opposite applies to lefties. You will notice that this is the same stance you employ when setting up for a draw.

Your golf stance is similar to the one you adopt in baseball. It is the foundation with which a player finds balance, comfort, and efficiency in their swing. I learned about golf stances the hard way as a competitive junior.

I used to operate with the grip of death and produced an outside-in swing path on most shots. Sometimes, I got away with it, but when my left foot, hips, and knees opened up more, it aggravated the result.

Since my swing mechanics were too complex to tinker with on the golf course, I would close my stance slightly to compensate for the shape. This was not a permanent fix, but it did mitigate the effects and help me straighten out my ball flight.

The bottom line is that you can benefit from a closed stance in certain scenarios. However, you should not adopt this as your permanent setup because of the risk of erratic shots.

Pros of a Closed Stance

An extreme fade or slice is generally caused by a golfer swinging over the top and cutting across the ball. Just like a tennis player who uses that drop shot with a cut so that the ball stops rapidly.

Operating with a closed stance can encourage maximum rotation, prompting you to clear your waist and shoulders through impact. You’ll notice that this boosts power and helps you square your clubface at impact for straighter results.

My one buddy leads a “tough” life coaching in Phuket, Thailand, where all his students are beginners. He teaches them to hold the golf club the other way around and induce a baseball swing. His students find this awakens the rotation motion and helps them understand its importance in the swing.

You grab the clubhead and channel your inner Ted Williams, and feel how your hips and shoulders rotate.

A closed stance is required when you set up for a draw. This aligns you to the right of your target, anticipating the curve to the left.

A draw is handy for right-to-left doglegs for right-handers and left-to-right holes for lefties. Following the lay of the land shortens the hole and helps you position yourself optimally for a hassle-free approach.

Closing your stance sets you up to produce a draw and strike the ball with a delofted clubface. You will find that this approach lowers your trajectory to restrict the impact of the elements. The uninterrupted flight leads to consistent distance and accuracy.

Low flight is highly beneficial when playing into the wind or when you are stuck under a canopy of trees. You will find that reduced flight in these conditions allows you to deliver ample yardage, despite the struggle.

We have all been there. The middle of a bush, behind a tree, and my latest achievement, behind a lamp post.

Closing the stance and clubface generated an in-to-out swing for a low hook when I was right behind a tree stump. The results were not always perfect. However, when my handicap dropped to single figures, and I practiced frequently, I had a successful record of escaping trouble.

Cons of a Closed Stance

Unless you’re stuck behind a tree or bush, you only have to open or close your stance slightly. When players start to hook their shots, they aim further right of the target for a closed setup.

The downside of the increased roll is the inability to control your distance. The low trajectory causes your golf ball to hit the ground hot and run like Usain Bolt, making it difficult to hold the green. As a result, you consistently sweat to get up and down. Instead of reading the line of a birdie putt.

I used to play with an excellent player in high school with a gentle draw that made me jealous. The only problem was that the bad days were terrible.

One day, I watched him miss every fairway because of the intense sidespin that sent his ball careering into the left rough. Luckily, he could escape trouble. Nevertheless, he lost so much confidence, and this specific round of golf traumatized his next ten games.

Other Types of Stances 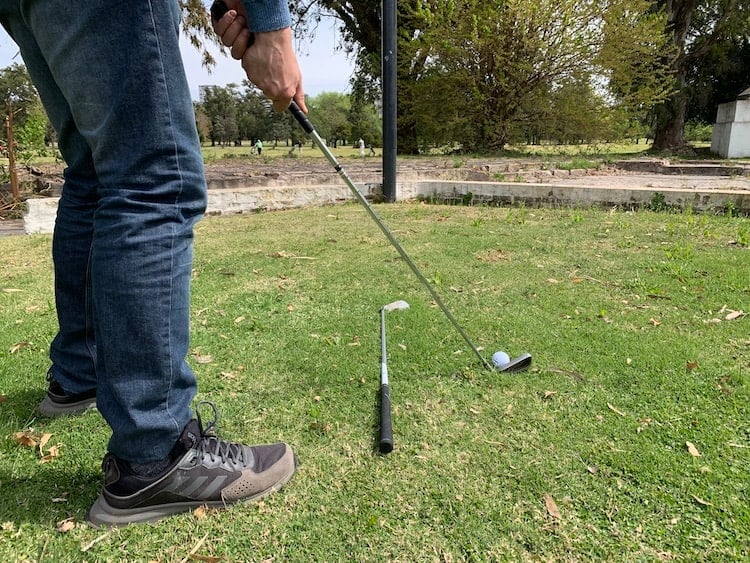 An open stance is the opposite setup of a closed golf stance. In other words, your toeline will aim to the left of the target while the clubface is still square to the target.

Advantages of an open stance

As a youngster, I watched my older brother on the range. He could work the ball almost any way he wanted, and I wanted to do that. I thought I needed to change my grip or swing path, among other things. How naive I was.

All I had to do was open my stance and make a normal swing without changing much, and I noticed a slight fade. When you can work the ball any way you want, you have more in your artillery to achieve the best possible outcome for each shot.

Every golf hole poses different challenges. I experienced this first hand at my home course littered with tall trees, water, and perplexing undulation. A higher ball flight helped me hit the ball over the trees hundreds of times.

Furthermore, the higher ball flight allows us to land the ball much softer, which is necessary for long par 3 tee shots and par 4 approach shots.

Disadvantages of an open stance

The open stance encourages a left-to-right ball shape with a higher ball flight. Unfortunately, this can lead to a loss of distance, something exceptional players like Rory Mcilroy may disagree with. But, we are not him and must play to our strengths and abilities.

The more you open the stance and the larger the fade becomes, the more distance we will lose. This sets you up for tricky approach shots requiring hybrids or long irons, which reduces your chances of attacking the flag.

I spent most of the last decade living in Cape Town, where wind is a permanent feature, and I am well versed in its torturous tactics. When I first set up shop in the Mother City, I played with a natural fade and got smashed all over the place by the breeze.

In addition, my open stance and clubface increased my apex, and the wind took hold of my ball and killed my yardage. I corrected this by closing my stance slightly and operating with a forward press setup. 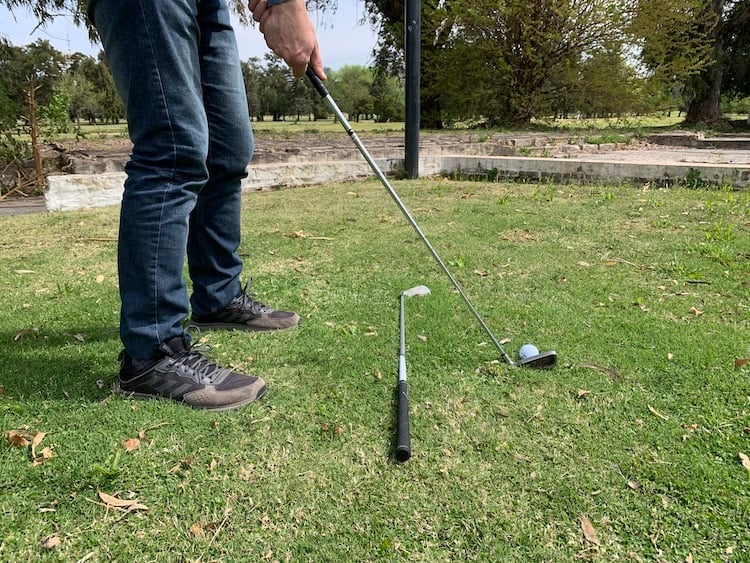 The square stance is when the left front foot is parallel to the back right foot and aimed at the target line. Your feet need to be shoulder-width apart, and the clubface has to be square to pull off this most common stance.

For example, you can have a neutral stance, perfect back position, hips, and knees in line, but when you play your shot, you have the ball in the center of your stance. This will make you push the ball to the right, even with the perfect swing.

Advantages of a Square Stance

The greatest advantage of a neutral stance is that it prompts straight ball flight to boost your accuracy around the golf course. You will find that this balanced position encourages a fluid swing line with minimal deviation for a square clubface leading into impact.

Disadvantages of a Square stance

The downside of constantly operating with a square stance is that it prohibits your ability to shape golf shots. This is particularly annoying on dog leg holes, where a draw or fade can nip you around the curve and give a short, direct approach to the dancefloor.