Pulling Your Irons to The Left? Here Are Some Reasons Why

Pulling the golf ball has always been one of my least favorite misses. The problem with the pull shot is that it feels so good. As soon as you pull the ball, it feels like it’s going to go a long way.

Most pulls are solid strikes.

I know a lot about pulling golf shots and this ball flight because it’s a common miss for me. The good news is that there are some easy fixes to help you eliminate the pull shot and get your ball flight straightened out.

Here are some reasons you are pulling your irons right to left and the best ways to go about fixing it.

What Happens When Pulling Your Irons

Pulling your irons is when the ball starts out immediately left across a right-handed golfer’s body.

A draw golf shot starts out to the right or straight and then makes a turn left.

However, with a pull, this is not a shot that turns; it simply goes straight left from the tee.

The club face of the golf iron is often square when this happens and that is why the shot stays straight as opposed to having much of a turn.

A pulled shot typically goes a long way, as the clubface is often square or even slightly shut. However, it can still hurt your score as it will likely be off the green or rough.

Doesn’t it always seem that in golf, there is never a simple, quick fix to the issue? The first part is always to determine what it is that is causing the problems in your game, and then it’s a matter of fixing it.

I’m going to give you 5 of the top reasons you are likely pulling the ball and then some tips on determining which one is the problem and how you can fix it. 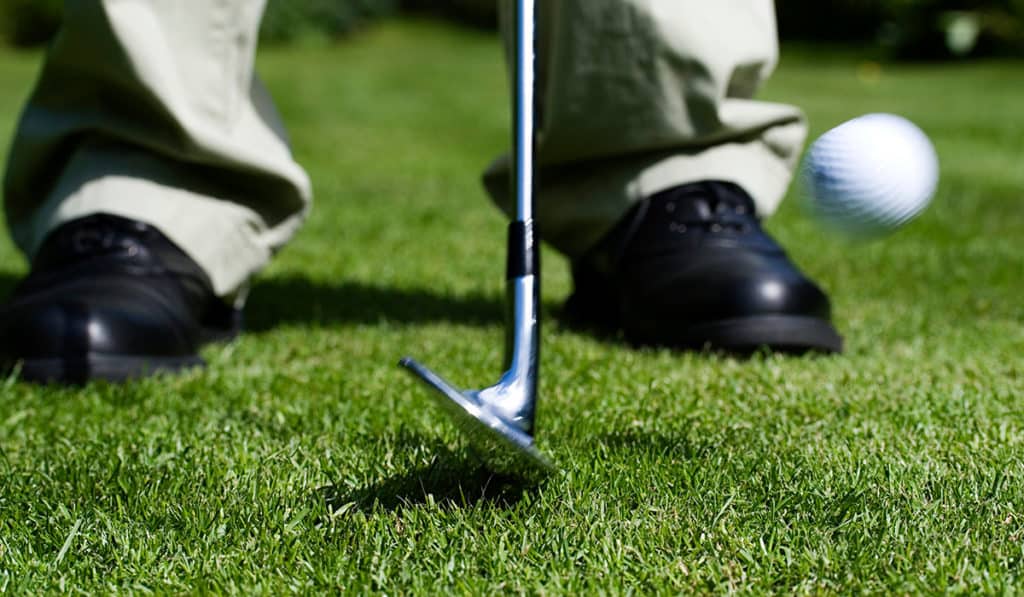 What happens here is by the time you make contact with the ball, your body has already started to rotate towards your finish, and your clubface may even be slightly closed.

The ball position for many amateur players is a major issue because of confidence. In golf, there is a lot of inconsistency in the setup and stance.

In fact, if you watch professional golfers, they take quite a bit of time to ensure that their setup is perfect. At the address position, golfers must feel like the body and clubface can return to square for an ideal impact.

One way to know if ball position is the issue is if you are pulling your irons and not your driver or your hybrids but not your wedges. Essentially, is your setup correct for some clubs but not others?

Use golf alignment sticks and even a mirror to practice your setup and ensure that the ball position is where it should be for each club.

Sometimes amateur golfers intentionally shut the clubface of their iron or even driver to help avoid a slice. Although this issue doesn’t typically fix a slice, it can undoubtedly decrease one if you have a hard time releasing and rotating the club head.

However, there are also times when a golfer who slices it suddenly stops slicing. When this happens, the clubface is still shut, but the slice spin is no longer on the ball.

Hitting the golf shot with a slightly shut clubface like this can cause a pull.

I’ve seen many players that have no idea how to lay a clubhead flat. So many will close it, thinking that it is square.

One of the best ways to test if your clubface is square is to simply hold it up to a 90 degree angle. You can even set up with the club in a door jam and look at how it looks. You want the base or sole of the club to be directly up against the straight edge. 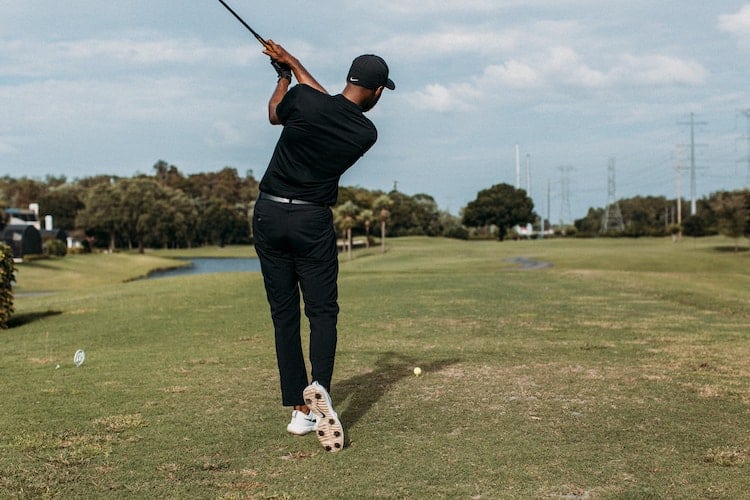 Timing in a golf swing is so important. If the hands and the body are not working together, the results of the golf shots are not going to be ideal. Essentially players must ensure that they are rotating their lower body both back and through each shot.

If the body stops rotating and the arms continue to swing, the ball is going left.

So many players worry about the fact that they are stopping their body rotation, but sometimes this is a cause of never really starting.

When you take the club back, make sure that you are turning your lower body to rotate, and then just keep that motion going as your arms swing back.

If one goes without the other, the dispersion rates in your game will be a bit out of control.

One way golfers can work on this is by hitting chip-type shots. The chip shot is a mini representation of the full swing. Getting your lower body to turn back in a chip will force it to turn through, resulting in a much straighter shot.

4. Club Path Over The Top

Have you ever been told that you bring the club over the top on the downswing? This is a very common club path for the amateur golfer, and it can create an impact position with a slightly closed clubface and golf shots such as hooks, pulls, and sometimes even a slice.

If your club path is over the top, there are likely two reasons for it.

The first is that you may have taken the club outside on the takeaway and never gotten it on the proper path. The second reason is that when you tried to make the transition from the backswing to the downswing, you never got the club dropped into the correct position.

Instead, at the top of the swing, there needs to be a start of a rotation that uses the legs to pull the arms into place. This is one of the more difficult shot fixes, and it can take time to get the swing plane and swing path correct.

Use an alignment stick, make sure your takeaway is perfect, and then feel as though the club drops into place at the top of your swing. 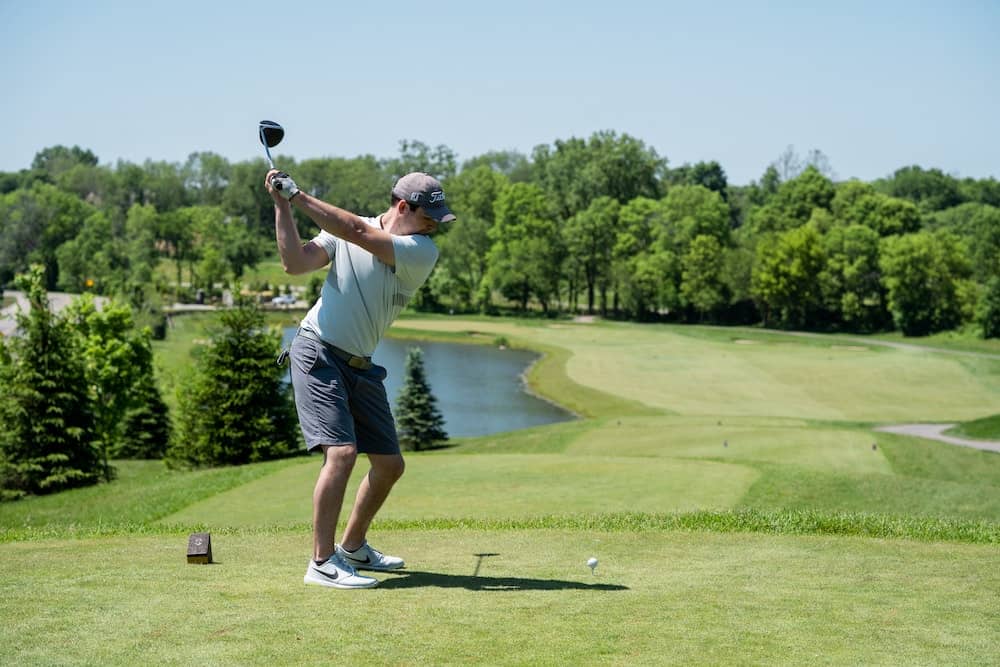 Last but certainly not least is an issue with weight transfer that can cause you to pull your shots. If your weight hangs back a bit at impact and the arms continue to rotate and swing through the shot, it often shuts down the clubface and causes a pull.

As you set up to hit a golf shot, the weight should be somewhat balanced. Then as you make a turn back, it goes to the right foot (right-handed golfer), and then, through impact, it is already transferring to the left.

Golfers that learn to make impact with most weight transferred to the left side will see more power and straight shots with a square clubface.

You will know improper weight transfer is the culprit of your bad shots because of the finish position you are in. If you are leaning back, work on weight transfer.

How to Identify and Fix This Problem

Sometimes a pull shot is a quick fix; other times, you may be working on this issue for a while.

One of the best ways to identify what the issue is in your golf swing is to take a video. So many golfers have a great phone that they can use to have a friend take a video down the line and head on.

Go through these videos in slow motion and see if any of the five reasons why you are pulling your irons right to left seems like they may be happening.

In addition, you can meet with a golf professional who will quickly identify what the issue is and give you a plan to fix it.

Luckily, the pulled golf shot is still a good strike.

Therefore it becomes most important to make these minor tweaks and get the ball flight straightened out. You won’t need to reinvent the wheel here; simply changing the setup, working on better body rotation, or getting the swing plane straightened out will do the trick.