What Does Pin High Mean in Golf (and Is It a Good Thing)? 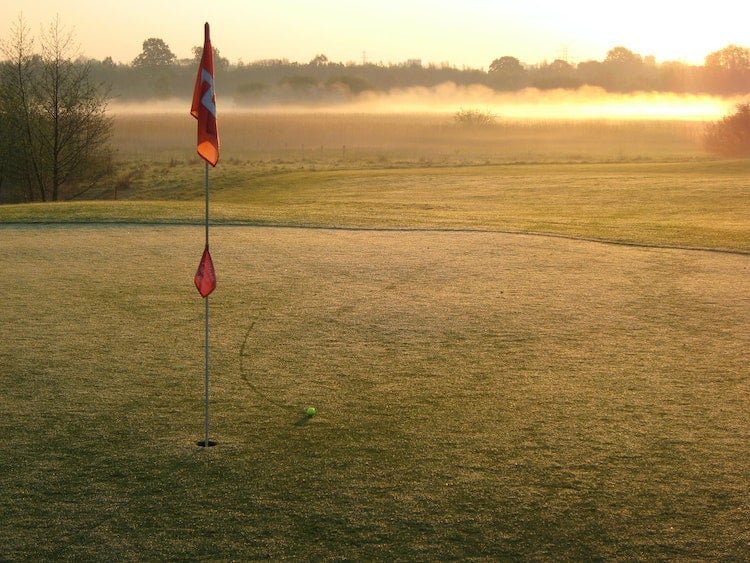 When I was first learning to play golf, I often struggled with the direction of my approach shots.

On a particular par 3 hole, I flushed a 7-iron but thanks to a nasty wind gust ended up 20 yards to the right of the hole, although the shot was the correct distance. Needless to say, I was wishing I could take a mulligan!

My Dad said, “Well at least your tee shot was pin high.” I remember glancing at him with a deer in the headlights type of look. Since most beginners may not know what pin high means, we decided to go discuss it in this post.

What Does The Term Pin High Mean in Golf?

The term pin high may sound complicated but it’s actually quite simple. A pin high shot is any shot that travels the exact distance of the flagstick. Let’s go over a couple of examples below to further explain things.

Have you ever hit a good iron shot into the green that was the exact distance of the pin but nowhere near the location of the hole? Surprisingly, that’s called a pin high shot because your golf ball still wound up being parallel to the hole.

In contrast, have you ever hit an incredible golf shot that wound up just to the right or left of the hole for a short putt for eagle? That’s also considered a pin high shot.

Is It a Good Thing to Be Pin High?

As with most questions about the game of golf, the answer depends on a variety of factors. If you are pin high after a shot, it’s a good thing in that you selected the correct club and showed some accuracy with your distance control. Obviously, if you hit a pin high shot and only leave yourself a 3-foot birdie putt, that’s a fabulous thing!

However, being pin high is not always a good thing. For example, if you hit a pin high shot that ended up in a greenside bunker or (worse) out of bounds in a nearby water hazard, that’s not a good thing for your scorecard. Hitting the ball into the water hazard is especially bad since it results in a one-stroke penalty.

So, in other words, just because you hit the ball the correct yardage doesn’t help you if you landed too far away from the pin position. Plenty of golfers may be pin high after their second shot on a par 4 and still wind up making a double bogey or worse in stroke play. Heck, I’ve even ended up making a dreaded snowman (8) on a Par 5 after hitting a pin high approach shot.

Contrary to popular belief, being pin high has absolutely nothing to do with the height of your shots. It simply means that you hit your approach shot the correct distance, which would be even with the flagstick (or pin). As we discussed earlier, being pin high can be either a good thing or a bad thing.

Pin High is simply a slang term that is thrown around on golf courses all over the world. As you may or may not know, most golfers are extremely fond of slang words. After all, golf pins are a nickname for the flags or flagsticks.

Surprisingly, there is no difference between being pin high or being hole high. Both are slang words that mean the exact same thing: a shot that traveled a distance that is even to the pin or hole. Golfers use these terms interchangeably all of the time.

Would You Rather Be Pin High Or Pin Low?

It all depends on the layout of the green and the position of the hole location. Most of the time golfers would prefer to be pin high because at least they knew that they pulled the right club for their approach shot.

That being said, sometimes winding up pin low of the hole is an advantage. This is especially true if the pin location is uphill. Uphill putts don’t break nearly as sharply or as quickly as downhill putts.

Should You Leave The Pin in When Putting?

This has been a popular question ever since 2019 when the USGA made a new rule that allowed golfers to leave the pin in during their putts. The rule gives golfers the option to leave the pin in, remove the pin, or have their caddie tend the pin during a putt. One of the main reasons for the rule change was to hopefully speed up the pace of play.

According to Dave Pelz, a well-known putting instructor who has a degree in Physics, golfers should always leave the pin in while putting. Pelz led a study back in 1990 that proved that golfers will sink more putts just by leaving the flagstick in. The results of the study proved that the golf ball still has plenty of space to drop into the hole with the pole in place.

Famous PGA Tour stars like Bryson DeChambeau and Adam Scott have adopted the “pin-in” putting philosophy and it has helped their scoring. Dechambeau even did a short demonstration video on why he thinks putting with the flagstick in will help him sink a higher percentage of putts:

On the other hand, Golf Digest did an analysis with the golf teams at California Polytechnic State University on whether or not golfers should take the flag out or leave it in while putting. According to their research and trials, PGA Tour players would only benefit from leaving the flagstick in on 0.0033% of all putts!

So, should you leave the pin in place when putting? As with a lot of things in golf, there is no definitive answer. Though DeChambeau, Scott, and Pelz say the science supports leaving the pin in, most PGA Tour pros still pull the flagstick out of the hole before using their putter.

According to the USGA website, there is no competitive advantage to be gained by putting with the flagstick in or taking it out. The best thing you can do is experiment with both theories and see which one lowers your handicap and gets you closer to becoming a scratch golfer.