Breaking Down the Stack and Tilt Golf Swing 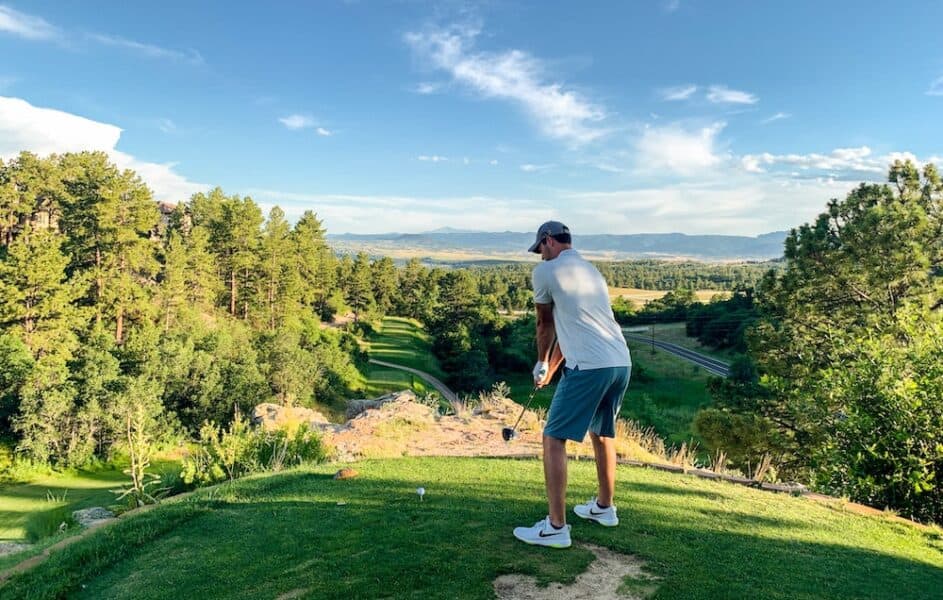 If you’re wondering what the Stack and Tilt golf swing is, you’ve come to the right place!

After reading this article, you’ll be able to decide if you want to implement some of principles of this method into your golf swing.

What is The Stack and Tilt Golf Swing?

While most golf techniques focus too much on variables like stance, grip, and posture, the Stack and Tilt golf swing puts more emphasis on fundamentals of the swing like keeping the bodyweight forward and the arms straight. This leads to better ball striking, which leads to increased distance and improved control.

Golfers who struggle to hit the golf ball off the sweet spot of their clubs consistently should try out the Stack and Tilt method.

The Stack and Tilt golf swing was initially invented by Andy Plummer and Michael Bennett, two golf instructors who are obsessed with simplifying the golf swing.

This golf swing was only known by a small circle of folks until Golf Digest did a feature article on Aaron Baddeley, who was adamant about how much the technique had improved his game.

More PGA Tour golfers have adopted the Stack and Tilt since 2005 and some folks consider it to be a game-changer to the world of golf.

Breaking Down How The Stack and Tilt Golf Swing Works

The above YouTube video from Nick Taylor Golf does a fabulous job of explaining the differences between the Stack and Tilt and the conventional golf swing.

Here is a brief rundown of the basics of the Stack and Tilt and how it works.

If you break down the swings of all the best golfers in the world, you will see a wide variety of grips (strong, weak, or neutral) and alignments (some aim right, some left, etc).

You’ll also notice that some of the top players in the world swing with an upright posture while others seem to be more hunched over during the swing. In other words, these variables of the conventional swing can be left up to individual preference.

Though the best PGA Tour players differ in lots of areas, they all have one thing in common: the ability to make consistent contact.

This means that they hit the ground at virtually the same place every single swing. This is why the most important principle of the Stack and Tilt golf swing is to focus on making consistent contact.

Keeping your weight forward during the entire swing will allow you to hit just in front of the golf ball, which is the ideal spot for the clubface to hit if you’re hitting an iron. The conventional swing calls for golfers to start with their weight more on their back foot.

This causes some folks to never make good contact consistently due to the lack of balance.

2. Increase Your Power By Tilting Your Left Shoulder Down

Instead of moving the left shoulder inward as the conventional swing calls for, Stack and Tilt students focus on simply tilting their left shoulder down during the takeaway.

This helps keep the head still and ensures you’ll hit the ball first, not the ground. No more painful chunks!

This slight tilt increases your distance without adding any extra head movement. This means you’ll be able to hit the ball flush more often.

3. Bring Your Hands In To Control the Curve

Have you ever noticed that very few golfers hit the ball exactly straight?

The natural swing of most folks leads to either a draw or a fade. A big part of keeping the ball in the fairway is learning how to control the curve of your shots.

The Stack and Tilt swing is built on bringing the hands in during the backswing. This promotes a nice in-to-out golf swing that will lead to nice draws.

This is a huge benefit for newer golfers, as most of them struggle with a wicked slice that leaves them frustrated most of the time.

4. Knee Position Changes During the Swing

For a true Stack and Tilt golf swing, the knee position changes during the backswing, downswing, and the complete follow-through of the swing.

During the backswing, the right knee straightens as the left knee flexes a little bit. This is of vital importance because it allows the hips and shoulders to turn more easily.

During the downswing, the knees both return to their original flexed position just like in the swing setup. When completing the follow-through, the left leg straightens out a tad.

5. Keep Both Arms Straight At Impact

While the left arm will naturally bend a bit during the takeaway, once the downswing starts both arms should straighten out.

When a golfer bends one or both arms too much during the swing, this messes with the radius of the swing. This makes it nearly impossible to make solid, consistent contact with the golf ball.

Too much bend in the arms can result in the banana slices that all golfers hate. That is because any bending in the arms makes it too easy to cut across the ball.

The golfer is much more likely to hit a nice baby draw when the arms are kept straight.

Players on Tour Who Use This Technique

You may be surprised to learn how many PGA Tour golfers employ the Stack and Tilt method. Here is a quick list of them.

You knew Baddeley would be on this list since the Golf Digest article put the Stack and Tilt golf swing on the map.

Baddeley turned pro in 2000 and racked up eight wins on a variety of tours. The 40-year old Australian utilized this swing for several of his best years on the PGA Tour.

Weir has 14 professional wins since turning pro in 1992. He won The Masters in 2003 and for a large part of his career was a huge fan of The Stack and Tilt method.

The 51-year old Canadian recently won his first PGA Tour Champions tournament in May of 2021.

Rose has one of the prettiest swings on tour and has accomplished a great deal on the links. The 2013 US Open champ may not be a true Stack and Tilt student but he definitely has some of the core principles in his swing.

Rose’s coach, Sean Foley, may teach some proponents of this method, as several of his PGA Tour students have similarities.

Wi has yet to win on the PGA Tour but his seven Asian Tour wins are tied for ninth in the record books. Wi is a true Stack and Tilt disciple, as he is coached by Mike Bennett and Andy Plummer.

Heck, Wi even helped them name the swing “Stack and Tilt”. Bennett and Plummer consider Wi’s swing the best example of the method.

Waite has four professional wins and loves the Stack and Tilt technique. The 57-year old New Zealander turned pro in 1987 and last played on the PGA Tour Champions in 2019.

Is It an Effective Technique?

Absolutely – the Stack and Tilt technique has been around a long time and has helped many golfers improve their ball-striking ability.

Though the conventional golf swing is more commonly taught, one cannot argue with the amount of success that some golfers have had with the Stack and Tilt. The technique has helped golfers all over the world shoot lower scores.

Who is The Swing Best Suited For?

The Stack and Tilt method is suited for almost any golfer who wants to improve their game.

Here is a brief list of folks who could benefit the most from implementing the technique in their golf swing.

If you struggle with a mean slice that you just can’t seem to solve, read up on the Stack and Tilt. The Stack and Tilt will teach you how to bring your hands in during the swing.

This will allow you to swing with a more in-to-out path and will help eliminate your slice. No more playing out of the wrong fairway because now you’ll hit a nice penetrating baby draw.

If you are constantly catching the ball too thin or chunking the ground before you even touch the ball, try out the Stack and Tilt.

The key move to the Stack and Tilt is to make sure your weight distribution is more toward the front foot. A good rule of thumb is to aim for 60% of your body weight to be on the front foot at set up.

This will allow you to hit the ball first, then the ground. You’ll love the crisp, clean sound of a purer strike on the golf ball. There is nothing quite like it!

When a golfer first decides to take up the game, learning the conventional golf swing can quickly become overwhelming.

There are too many variables in play like tempo, grip, stance, alignment, and posture. This can lead to overthinking, which almost always decreases performance.

The Stack and Tilt technique cuts through a lot of that noise and breaks the swing down to three dynamic principles (Contact, Power, and Control). For some folks, this is a much easier swing to learn.

The last thing any golfer needs is some sort of long mental checklist while on the tee box.

The Stack and Tilt could be a great option for older golfers or golfers with any type of joint pain.

The method calls for the toes to be pointed outward. This may take some getting used to, but it’s actually quite comfortable.

This takes a great deal of stress off the joints and leads to less back, knee, and hip problems. Many senior golfers also find that they can hit the ball further using the Stack and Tilt because of the increased leverage that is created.