What is Lag Putting? +Tips to Improve This Part of Your Game 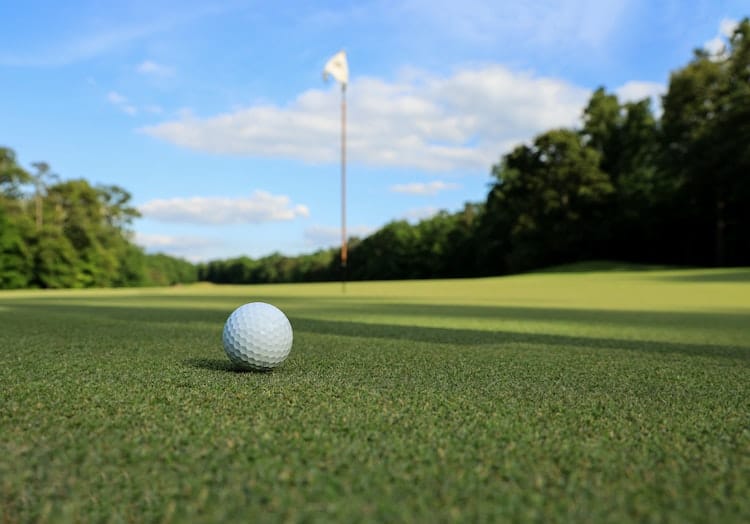 In a recent post, I provided lag putting drills to undertake on the practice green.

However, this article takes a step back to better understand what lag putting is and how you can better execute them on the golf course. In addition, I will explain why lag putting is an effective technique to combat the dreaded 3-putt.

Following these steps will enable you, as an amateur, to confidently navigate the putting green and reduce your overall golf scores. Furthermore, I will teach you how to read grass grains and use them to your advantage in lag putts.

What is Lag Putting?

Lag putting is the art of getting the ball close to the cup on long putts. Your intention is not to sink the first putt but rather rest it within a couple of feet of the cup. This puts you in a prime position to drain the second putt. If you hit a green in regulation, that would see you card a par.

You typically pick to lag your putt when you are more than 20 feet from the hole. The majority of golfers, especially beginners, will not sink this putt. Therefore, you should set yourself up for a short putt on your next shot.

Tips on How to Hit Better Lag Putts

Lighter grips are best suited for lag putts which rely on feel and judgment more than anything else. A looser grip gives you a superior putting feel for two reasons. Firstly, it allows you to feel when the putter head is veering off-path, giving you a chance to pause and correct the issue.

Secondly, a golfer who employs lighter grips for longer putts can better feel the top of the backstroke for optimal distance control. A firm grip reduces feedback, limiting your ability to judge power and putter head path.

Golf Pro Rory Hie suggests not controlling the pendulum motion. Instead, allow your grip to provide the feel of the putter’s weight in your hands. In addition, a lighter grip helps you better judge the speed of the putt to prevent you from over-hitting your putts:

The 15, 20, 40, and 50-footer drill is one you should consistently apply in your practice sessions. Lay down five balls at each interval and start from the closest mark.

Putt all 5 balls, and do not progress to the following distance until all balls are within 3 feet of the hole. Keep going until you achieve a 100% success rate from the furthest mark. This helps you achieve a superior feel for the ideal putter length on the backstroke for each distance.

When you get onto the course, you will not fear 60-footers, as your muscle memory will take over and boost your long putting game.

Look at The Cup During Practice Strokes

Coaches often grill into high handicapper golfers, the idea of looking over the ball at address. While this is correct at setup, I discourage it during your practice stroke.

This is problematic on a lag putt where you need to judge the distance to the cup and break of the green. You cannot analyze the layout correctly if you are not focused on what lies ahead. Zero in on the hole during your pre-shot routine and take a few practice strokes to judge the required strength.

Do this as often as you need until your putting stroke replicates the shot you are about to hit. Remember your training from the Start Small drill and employ that feel for proper distance control.

Learning to read greens takes practice, but the faster you learn the ropes, the easier a long putt becomes. Occasionally, you may have a 50-foot downhill putt that breaks left to right. Instead of employing the same length backstroke as I would on a flat surface, I reduce my power.

In addition, I use the break of the green to take my ball towards the vicinity of the cup. Amateurs struggle with this element of the green, as the undulation is confusing and startles the average golfer.

Rickie Fowler explains that he reads the green as soon as he walks up to it. This gives him an understanding of which direction it is sloping and the level of undulation:

Once he has marked his ball, he approaches the hole from the other side to envision how the ball will travel down to the cup. Then he reads the green from behind his ball and correlates the two findings.

Once he feels the line of the putt, he can now turn his attention to the weight of his stroke. This helps him optimize his speed control for better lag putter results.

Another significant factor to consider is the grass grain and the direction of its growth. Golf instructor Stefany King shows a simple trick to reading the growth direction of the grass. This helps you identify the speed of your putt and the path of your ball roll:

She suggests inspecting the cup and identifying the area that is browned out around the edge. This is the side where the grass is growing with the green. That means if you putt from that side, it will be a slower putt and a straighter line.

Conversely, if you putt from the opposite side, the ball will roll faster and gravitate to the brown side of the cup. This is a good start for beginners willing to go the extra mile for a good lag putt. Over time you will learn about the impact of Bermuda, poa, and bentgrass. But for now, this is an ideal introductory lesson.

The key to your first long-range putt is to get it into a zone of 3-feet around the cup. Work on getting the ball past the cup, especially on downhill putts. You cannot overhit the ball, as it may roll off the green.

However, if you leave your first putt short, you will face a tricky downhill second putt, which you want to avoid as much as possible.

My advice is to position an alignment stick 3-feet behind the cup to encourage you not to pass this point on your first putt. You can follow the same procedure as the start small drill, where you hit 5 putts from different distances.

In addition, there is the option to add scores into the equation to make your practice time more exciting. If you sink your first putt, you put yourself down for a birdie. However, a ball that passes the cup but remains within 3 feet equals a par.

Anything beyond the alignment stick or short of the hole is a bogey. After your 5 practice putts from each distance, tally up your score before moving to the following interval.