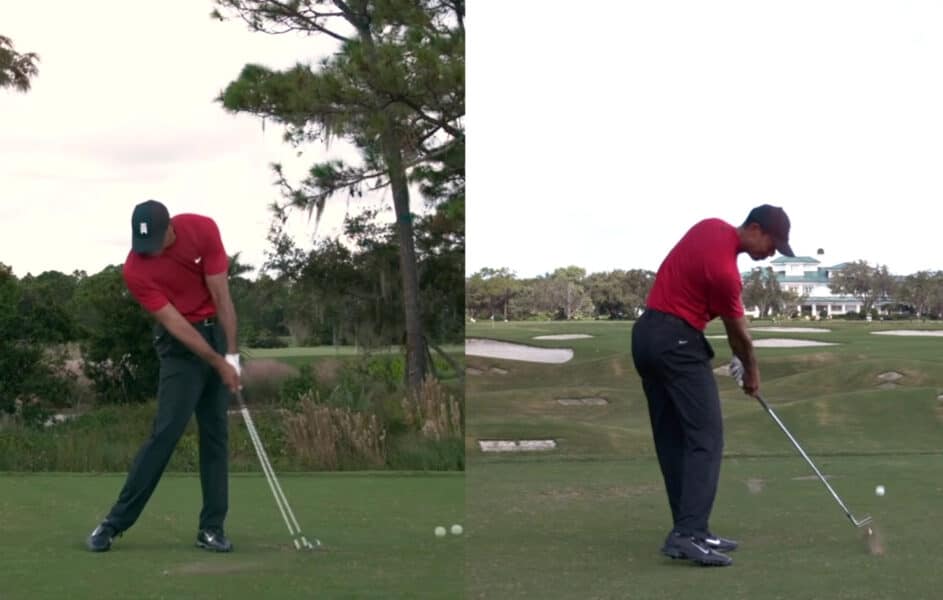 We all know that Tiger Woods had quite a few contributions to the game of golf. Perhaps one of the most important was the stinger shot.

Of course, Tiger didn’t really invent this shot, but he made it something that every golfer wanted to have in their bag.

Learning how to hit the stinger can help your game in various ways. This shot that became popular in the late 90s is still something golfers want to use in their game today.

Let’s take a look at how to hit a stinger far and low.

When It’s Best to Hit a Stinger Shot

The great thing about the stinger shot is that it can cut through the wind and travel for a long time. If you are looking at a fairway where the grass is cut tight and things are rolling well, the stinger is a perfect shot to get you rolling toward your target.

This shot becomes easy to hit straight when you learn how to do it. For those that struggle with control, it can help you hit some straight shots with very low spin.

Stinger shots can be hit from the tee box, the rough, and the fairway. Some golfers use them to get out of trouble; others use them to put themselves in a great spot.

How to Hit a Stinger: 4 Simple Steps

There is no better way to learn how to hit a stinger far and low than to have Tiger Woods show us how to do it. The low stinger requires a consistent swing, stable movement, and a square club face. Here is how Tiger did it:

Now we’ll do a break down of each step below… 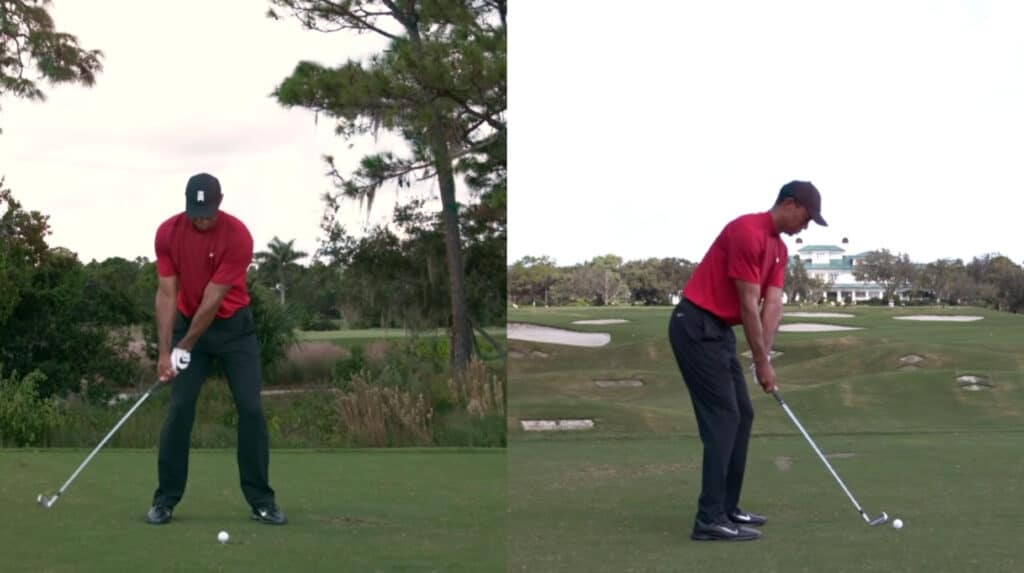 The setup on this shot does not have to be modified all that much. We like to see the ball just forward of the middle of the stance. Probably one ball forward will be enough, don’t play it all the way up in your golf stance.

Another trick I like to use when hitting the stinger shot is I put a little more weight on my front foot. It helps me to feel like I can keep the trajectory lower and complete that wriststop on the follow-through. 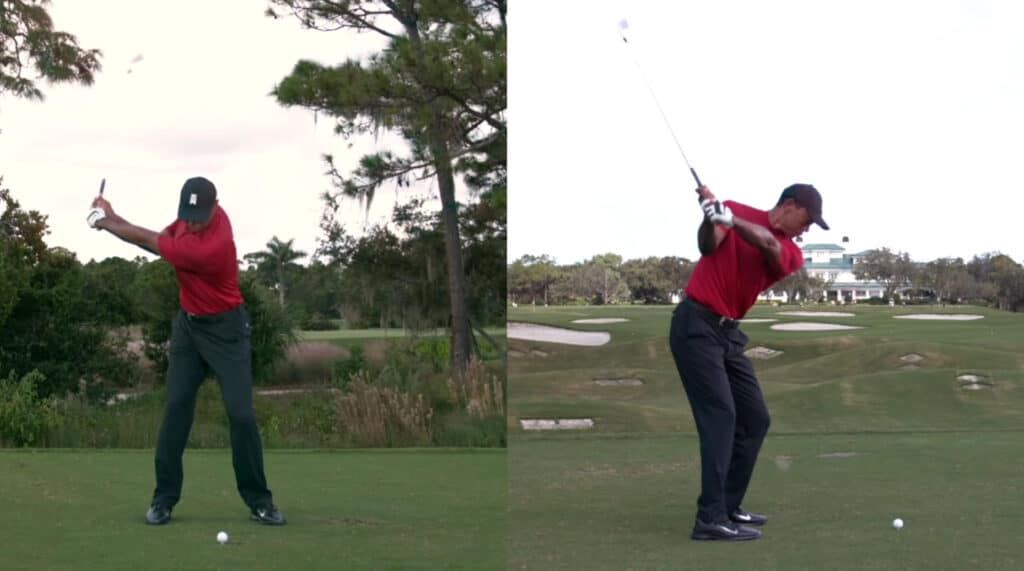 The stinger shot is about getting plenty of club head speed and applying it with a square club face, so the ball rolls for quite some time. This shot is not entirely about distance, so there is really no need for a full swing.

In addition, if you plan on stopping the golf club just after impact, you will have a much harder time if you take a full backswing. Most golfers that have success with a stinger shot are only taking the club back about ¾ of the way.

Most players have a hard time feeling where the top of their backswing is and don’t know when to start the downswing. Once you have made that shoulder turn where the shoulder is beneath your chin, you are in a position where you can make that transition to the downswing.

When learning how to hit the stinger, you may see more initial success if you take a shorter rather than longer swing. 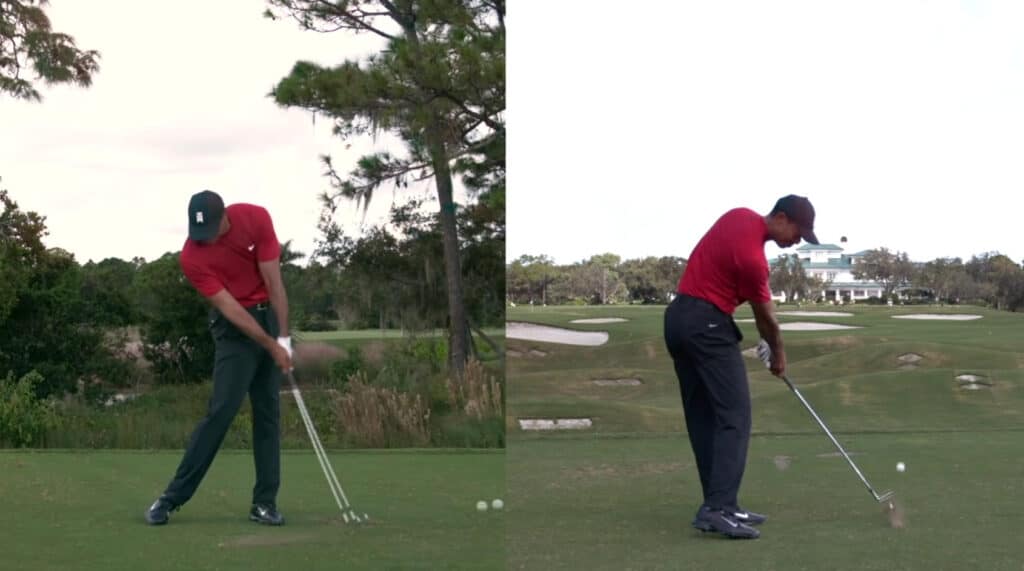 Of course, we know with science and momentum and physics that you won’t really be able to stop the club just after impact. However, it will feel like it.

This is where you will need a little bit of strength to hit the stinger tee shot because you are working to stop the momentum that you have just created on the backswing. I like to think of the golf ball and imagine a two foot area extending on the left side of the golf ball (after impact).

The line, I imagine, extends towards the target, so it is straight. As I’m in my backswing and making my transition to the downswing, I see this area as the place I would like to stop my shot.

Of course, I’ll end up with about a ¾ finish, but feeling this hold in this area is what keeps the trajectory of the stinger low.

Golfers need to be sure to take a divot when hitting a stinger and to maintain wrist angle at impact. The shot needs to come as a descending blow into the ball and not something that you hit up on.

Compression here is key, and nobody shows us that better than Tiger. These stinger shots always looked like they were hit with a tremendous amount of power because they were. 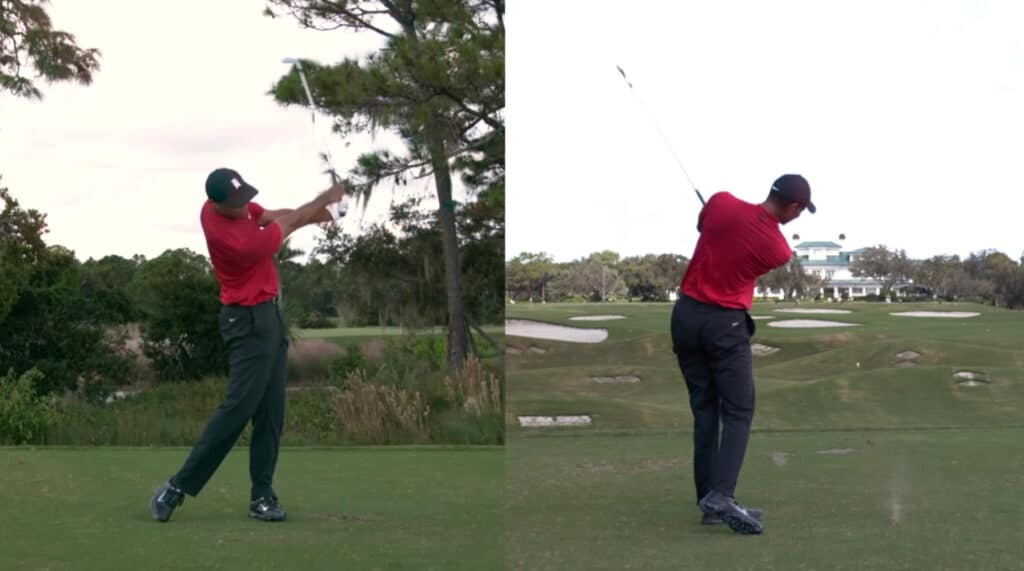 As you work so hard to stop the club just after impact to get that lower flight, you may not make it to a full finish on these stingers. However, you can see from Tiger’s golf shots that he still makes a full turn of the hips and a weight transfer.

Make sure that as you are working on stopping the club after impact, you are not stopping your body from rotating. In fact, Tiger mentions that hip rotation and turn are the key elements to hit the stinger well.

Some of the miss hits that you can get with this shot are hitting slightly behind it or even hitting the shot higher than you expected. Players that get really good with the stinger can learn how to hit a stinger draw or stinger fade.

The variations on a stinger shot should be relatively simple and can be made with small movements in the setup.

Best Clubs to Use for a Stinger

One of the key elements to hitting a stinger shot is to choose the proper club as well as the appropriate lie. Here are a few of the best clubs to use for a stinger.

One of the great things about long irons is that they are already lower lofted. These clubs have a lower loft that helps keep the ball flight down, and it can be considerably easier to get the trajectory that you are looking for.

Long irons like a 3, 4, or even 5 iron would be our first choice for learning how to hit this stinger. Hitting a stinger out of the rough with a long iron can be tough; I would recommend switching to the mid irons if your ball is a bit buried.

It’s hard to get the proper trajectory for a low and far stinger when using a short iron. However, if you are strong with your 6 and 7 iron, you can usually get them to work. With the 7 iron, expect a slightly higher ball flight and maybe a little more spin.

This means that your total distance will probably be a few yards shorter, but it’s still a shot you can use.

When fairways are tight or the wind is in your face, a fairway wood stinger is an excellent shot for an approach on a par 5. You can get a little extra distance and maybe even run one up on the green.

When hitting this shot with a fairway wood, make sure that you don’t get too quick with your tempo. Since these clubs are graphite shafted and lightweight some players get a little too eager and end up hitting the top of the ball.

The driver may seem like an unlikely club to use when learning how to hit a stinger far and low, but it’s a really great shot to have in the bag.

Certain holes require a bit more precision, and the driver can help you send your shot down the center with a more abbreviated swing. One thing to be careful of here is that you are still releasing the club head.

If you don’t release the clubhead, your shot won’t go straight, and you may end up in a predicament.