What is a Cross Handed Putting Grip and Is It Effective? 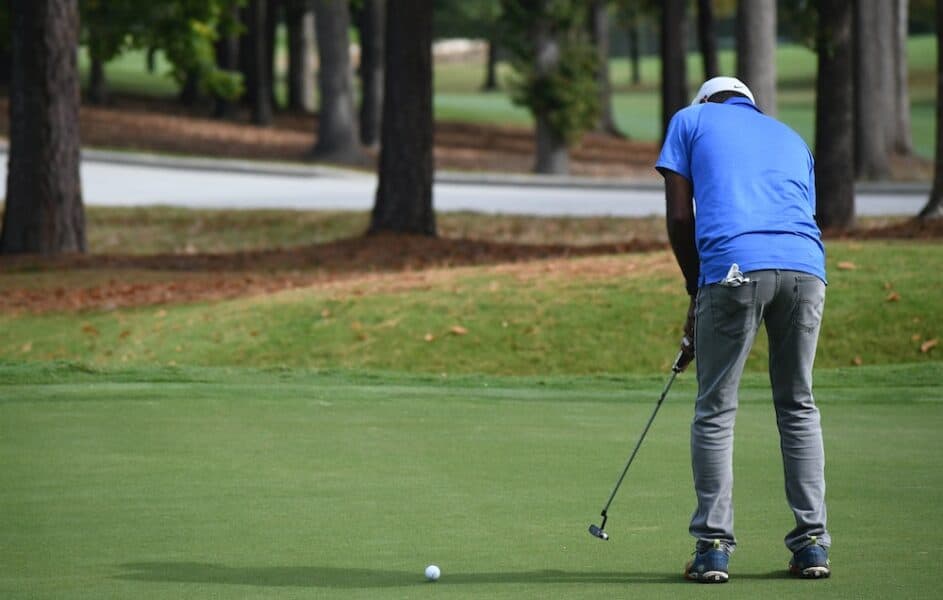 One of my favorite golfers is Rickie Fowler because of his dynamic putting ability and his positive attitude.

I remember watching a PGA Tour tournament on TV and noticing that Fowler was putting with his left hand lower than his right hand (cross-handed). When one of the announcers asked him about it, Fowler mentioned that the cross-handed grip helped him regain his feel when he was in the midst of a slump on the putting green.

If you play golf, you’ve probably heard of a crossed-hands putting method or grip.

But does this method work? We explore the effectiveness of this popular putting grip here.

What is a Cross Handed Putting Grip?

A cross-handed putting grip is often used by golfers who want to improve their putting accuracy or pace.

Do you know how the standard putting grip involves keeping your right hand below your left (for a right-handed golfer)? When using the cross-handed technique, the left hand is the low hand on the putter’s shaft instead of the right hand.

Though the cross-handed grip doesn’t get much publicity, it has been helping golfers regain their putting feel for several decades. Jordan Spieth, Billy Horschel, and Kevin Chappell are PGA Tour stars who are big fans of the cross-handed putting grip.

Other veteran PGA Tour stars like Bernhard Langer and Vijay Singh have employed the cross-handed grip at different points in their respective careers.

There are many benefits to using a cross-handed putting grip.

Most right-handed golfers have open shoulders. This means that the right shoulder sticks out just a bit further than the left shoulder.

This can make lining up your putts much tougher. It can also make keeping your shoulders square throughout the putting stroke more difficult.

When you move to a cross-handed putting grip, this naturally squares up your shoulders. Most golfers love that by using the left-hand low technique, they no longer have to worry about their shoulders flying open during the putt.

This leads to more solid contact with the ball in the impact zone.

2. Better Control of the Putter

Control means everything on the green. The cross-handed grip enables the golfer to feel the putter’s clubhead more easily.

This leads to more precise accuracy, especially on those long lag putts that are always tricky.

The cross hand grip also leads to more control of the putter face. This helps the golfer to putt with the proper speed.

Controlling the speed of your putts will lead to lower scores and a more enjoyable time on the course!

Remember how Jack Nicklaus said that the “hands are the swing wreckers”? That statement is also true for putting.

Too much wrist involvement can send your putt flying way past the hole and possibly off the green altogether (OUCH!).

When using the cross-handed putting grip, the wrists’ involvement in the putting stroke becomes limited. This is a great thing because it leads to a more consistent putting stroke.

As we all know, consistency is a huge factor in playing better golf.

This is very similar to the Vardon golf grip for a regular golf swing. Lots of golfers prefer this putting grip because it allows them to have both of their thumbs on the putter’s shaft together.

Other folks opt to point their right index finger down the side of the shaft. This is the most common variation of the reverse overlap grip.

Some golfers prefer to point both of their index fingers down the shaft of the putter. This is known as the Two Fingers Down Grip.

The claw grip is another common type of putting grip. With the claw grip, the left hand stays in the same position as the reverse overlap grip.

The right-hand remains lower on the club but makes a claw shape.

The claw grip makes sure that the shaft of the putter stays in the fingers of the right hand. This keeps the dominant hand (right hand) from taking over the stroke.

Some golfers opt to use a long putter when using the claw grip. Big-time PGA Tour stars like Tommy Fleetwood, Justin Rose, Sergio Garcia, and Webb Simpson swear by the claw grip.

This grip calls for the golfer to putt with their palms facing each other on the club.

Neither hand is lower on the club so this should keep either hand from taking over the stroke. Both thumbs simply rest on each side of the putter’s shaft.

Vijay Singh is a big fan of this grip because it keeps both hands in a neutral position.

This grip certainly works well for Mr. Singh, but many golfers find that they cannot put enough speed on their putts with this type of grip.