What is The Claw Grip & Can It Help You Putt Better? 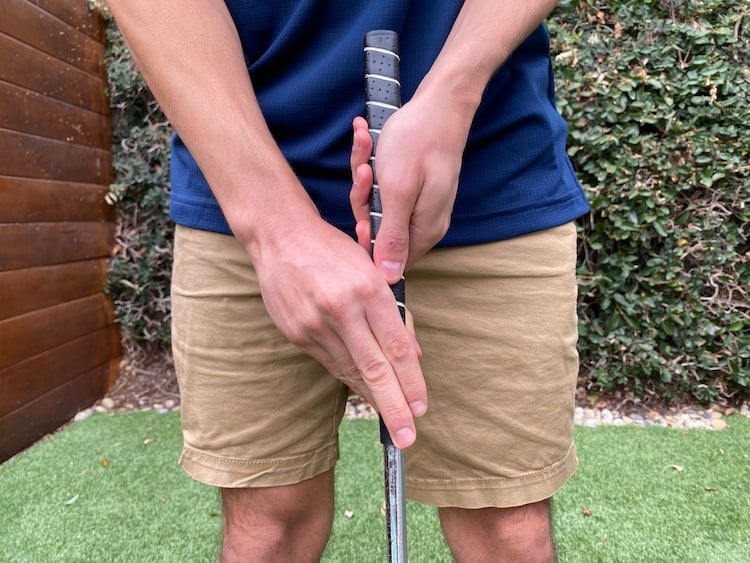 Do you struggle to sink putts? Did you know that a simple grip change can help you get more comfortable on the greens and sink more birdies?

The claw style putting grip has risen in popularity in recent years, both on the PGA Tour and with amateur golfers.

Most golfers use the Vardon grip to putt, but can the Claw Grip help you improve your game? Learn more about this putting grip style to see if it makes sense for you.

What is The Claw Grip for Putting?

The Claw Grip (also known as the pencil grip or prayer grip) is a different way of holding the putter and is considered unconventional by most golf instructors. With the claw putting grip, the left hand (aka the lead hand) holds the putter in the same way as any other putting grip. The thumb sits on top of the shaft and the forefinger points straight down the side or curls around the club.

The right hand (or trail hand) is where things get interesting with the Claw Grip. Instead of taking a normal grip like the left hand, the right hand (for a right-handed golfer) forms a claw. Both the index finger and the middle finger rest on top of the shaft as the rest of the putter fits right into the “V” of the right hand. 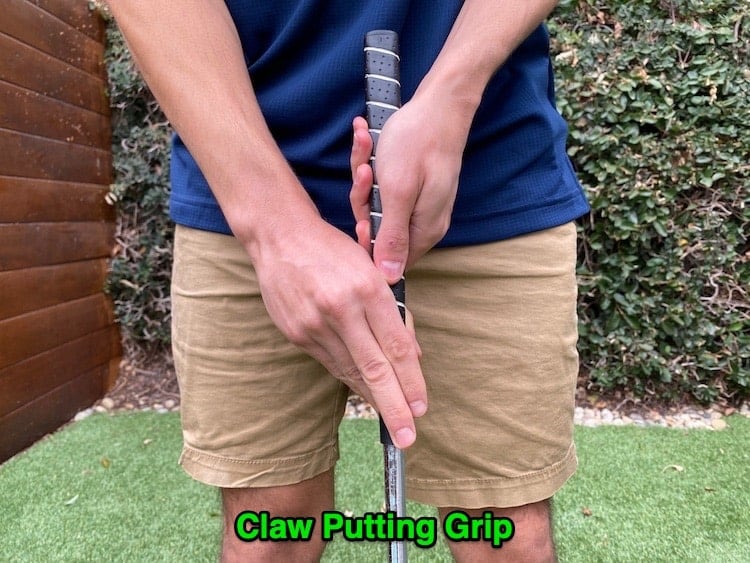 Why Some Golfers Use This Putting Grip Style

Golfers switch to the claw grip for a variety of reasons. Here are some of the most common.

Lots of golfers suffer from using too much wrist movement while putting. This usually leads to either not enough ball speed or too much ball speed. No matter which way you slice it, having a pace problem on the green is an awful feeling.

Coming up five feet short is super frustrating on the green and so is watching your ball fly past the hole. The claw putting grip helps the golfer control the speed of their putts.

2. Golfers Who Are Fighting the Yips

Have you ever heard of golfers getting the yips? It’s one of the most dreaded terms in golf because it severely affects a golfer’s ability to sink even short putts. When a golfer gets the yips, their wrist muscles convulse and move involuntarily.

Some golfers simply are not comfortable with a conventional putting grip. Many of these folks find that the claw grip is more comfortable. This increased level of comfort allows the golfer to make a more consistent stroke.

4. Golfers Who Want More Control of the Clubface

Is your clubface constantly flying open or snapping closed while putting? If so, the claw grip could help you keep the clubface straight. Again, this is because the claw grip keeps you from getting too handsy with your putting stroke.

The key to sinking more putts is to find an accurate putting style that allows you to make a full swing toward your target line. Switching to a claw putter grip allows many golfers to do this. It also makes it easier for golfers to lighten their grip pressure on the putter, which increases accuracy.

Pro Golfers Who Use the Claw Grip

Lots of professional golfers on both the PGA Tour and the European Tour use the claw grip. Here is a brief list of some of those players.

We had to put “Lefty” on our list, as he’s one of the most popular players in the world and is a big believer in the claw grip. Mickelson does switch back and forth quite a bit between the claw grip and a conventional grip.

The six-time major champion says that the claw grip helps put him in a better position while addressing the golf ball while putting.

Fleetwood has yet to win on the PGA Tour but he’s won five times on the European Tour. The 30-year old Englishman said he switched to the claw grip because the clubface of his putter was constantly flying open or slamming shut.

Fleetwood claims the claw grip helps him use his shoulders more during his putting stroke. With Fleetwood’s version of the claw grip, he prefers to keep his right hand more toward the side of the shaft instead of on top of it.

“Rosie” made the switch to the claw grip back in 2016 and it has served him incredibly well. Shortly after making the switch, Rose became the #1 player in the world.

Rose feels that switching to the claw grip has simplified his putting mechanics. It’s hard to argue with the results Rose has had since adopting the claw grip.

Garcia started using the claw grip back in 2011 after trying several different putting grip styles, including the cross-handed technique. After adopting the claw grip, Garcia went from one of the worst putters on Tour to one of the best.

Garcia is one of the best Ryder Cup players of all time. He also won his first major by capturing the coveted Masters Tournament title in 2017.

The saw grip is eerily similar to the claw grip and some folks even use the two terms interchangeably. With the saw grip, the left-hand remains in the neutral, or conventional, position.

The right-hand forms into a saw shape, instead of the cupped claw shape. The putter rests in the palm of the right hand with the right thumb grasping the underside of the grip. Two-time major champion Mark O’Meara was the one that made the saw grip famous.

One of the most common putting grips is the Vardon grip or overlapping grip. With the Vardon grip, both thumbs rest on the putter’s shaft and this gives the golfer good control of the clubface. The pinky of the right hand sits on top of the index finger of the left hand.

This one is also known as the “left-hand low” grip by some golfers. Instead of having your right hand in the lower position, swap hands and make your left hand the lower hand. That’s how you use the cross-handed putting grip.

PGA Tour phenom Rickie Fowler switches over to the cross-handed grip whenever he’s in the midst of a rare putting slump. Fowler claims this grip helps him regain his feel on the greens by helping him keep the clubface level at impact.

Take the left index finger and lap it over the right pinky. That’s the reverse overlap grip.