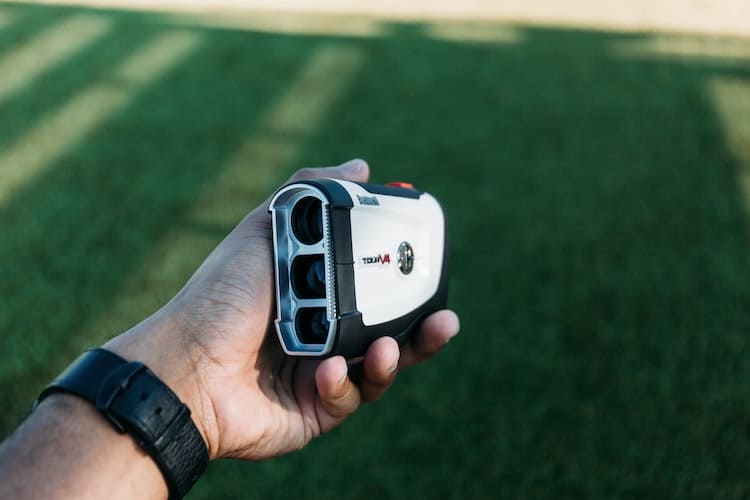 Over the past few years, rangefinders have become all the rage amongst golfers.

The PGA of America even made rangefinders legal in all three of its major championships back in May of 2021. The move was made by the governing body with the hopes of speeding up the pace of play on the golf course at these events.

I’ve been playing golf for several years and I’ll be the first to admit that I was slow to come around to using a rangefinder during my rounds. However, when I purchased my last set of golf clubs, the salesman kindly threw in a Bushnell Tour V4 rangefinder as part of the deal. Now I don’t know how I ever played a round of golf without it!

In the following review, I’ll go over what I like and dislike about the Bushnell Tour V4 rangefinder. Hopefully, after reading this, you’ll be able to decide if it’s the best rangefinder for you and your game. So, without further delay, let’s get to it! 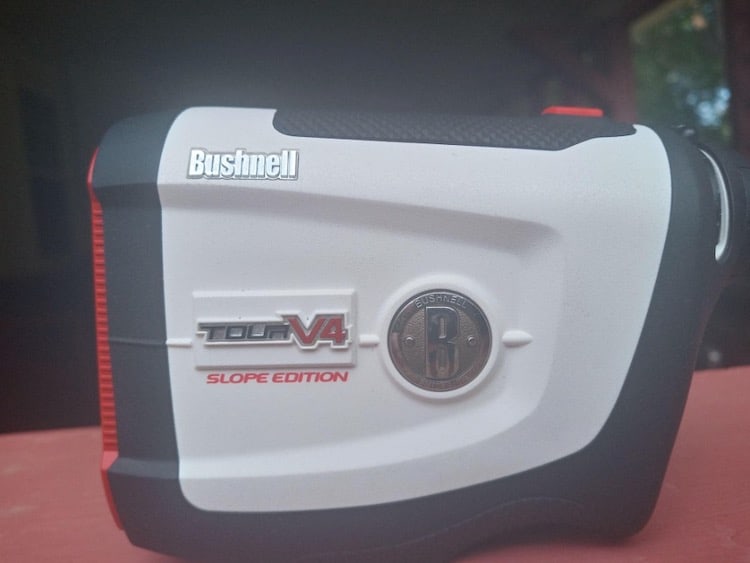 Bushnell has been making top-of-the-line rangefinders for over 25 years, so they have stood the test of time in the golf industry. The Tour V4 was first released in 2016 and it remains one of Bushnell’s best-selling rangefinders, even though the Tour V5 has been out for quite a while. The Slope Edition lets you toggle in and out of Bushnell’s special slope feature, which automatically adjusts its yardage based on the incline or decline of the slope.

The Tour V4 provides pinpoint accuracy and gives you a yardage number that you can be confident in each time you use it on the golf course. It also comes with Pin Seeker Jolt technology, which sends short vibrating pulses when you have correctly shot the laser to the flag. With the Tour V4’s 5x magnification, you’ll easily be able to see all of the key details of each green on the course.

Since the Tour V4 has so many key features, it’s hard to decide which ones I value the most. However, here are some of my favorite things about this particular Bushnell rangefinder. These are in no particular order.

What I Dislike About The Bushnell Tour V4

There’s not a whole lot to dislike about the Tour V4. The only complaint I have is that it doesn’t come with a magnet on it, which would make it easier to mount it on the side of the golf cart during a round. This would be much more convenient than having to take it in and out of the carry case throughout the entire round on the course.

Bushnell has converted me into a customer for life. While I used to think rangefinders were overpriced and unnecessary, I now don’t know how I ever played a round of golf without one! If you are on the fence about which rangefinder to buy, I highly recommend the Bushnell Tour V4 Slope Edition.

Overall, I’d give the Bushnell Tour V4 rangefinder 4.9 out of 5 stars for a variety of reasons. It’s insanely accurate and I love the Jolt Technology, which vibrates a little bit when you have locked on to the flag. This gives me peace of mind that I have aimed the laser in the correct spot. Pin seeker with jolt Technology provides you with short Vibrating bursts to reinforce the laser has laced onto the flag. Patented slope Technology provides compensated distance based on the incline or decline of the hole. Accurately ranges from 5 to 1,000 yards and 400+ yards to a flag within one yard.

The slope option is incredibly helpful because it factors in the degrees of slope for you, which tells you what the shot is actually playing. This makes a huge difference in the way of club selection. After all, most golf shots have some sort of slope involved.

If you are not a fan of the slope technology and just want the actual distance or you are playing in a tournament that doesn’t allow it, you can easily shift between modes by rotating the small notch dial on top. Again, Bushnell hits a home run with this feature.

I also love how the Bushnell Tour V4 rangefinder fits comfortably into the palm of my hand. It was designed with stabi-grip technology, which means it won’t slip out of your hand and it’s easy to handle. It’s also lightweight, so your arm and hand won’t get tired of holding it during a round.

Lastly, Bushnell is the most reputable rangefinder brand on the market. Tons of professional and amateur golfers around the world trust Bushnell to give them accurate yardage readings. If you’re in the market for a new rangefinder, you can’t go wrong with the Bushnell Tour V4 Slope Edition.