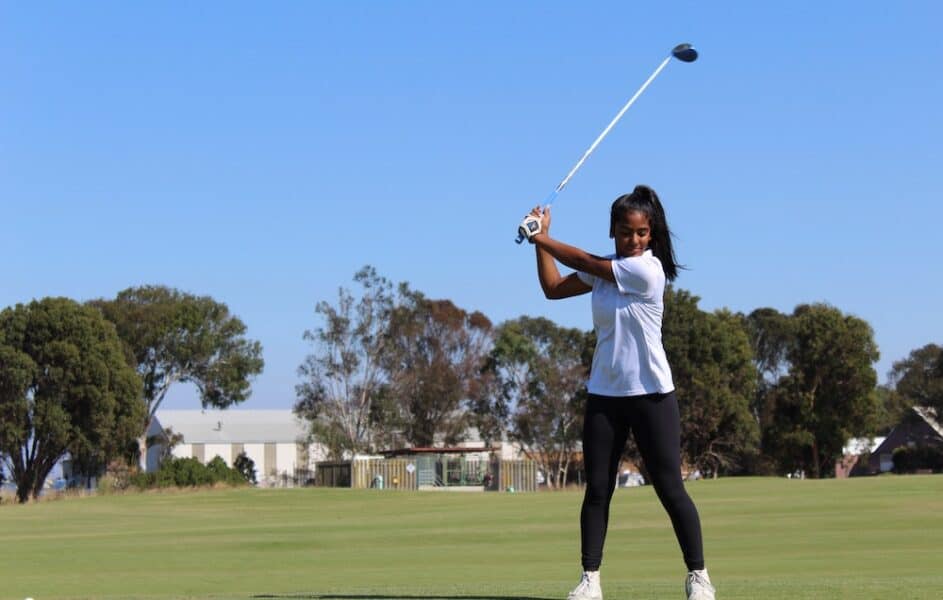 I was all fired up thinking that I’d be blasting the ball 300 yards off the tee like Tiger Woods in no time. Much to my surprise, the instructor took half of the first lesson to talk about the importance of having the correct grip.

Finding the right grip for your golf swing is arguably the most vital part of improving your performance on the course.

The 10 Finger golf grip is one of the oldest, most widely used golf grips in the game today.

But is it right for you? Let’s find out…

What is The 10 Finger Golf Grip? 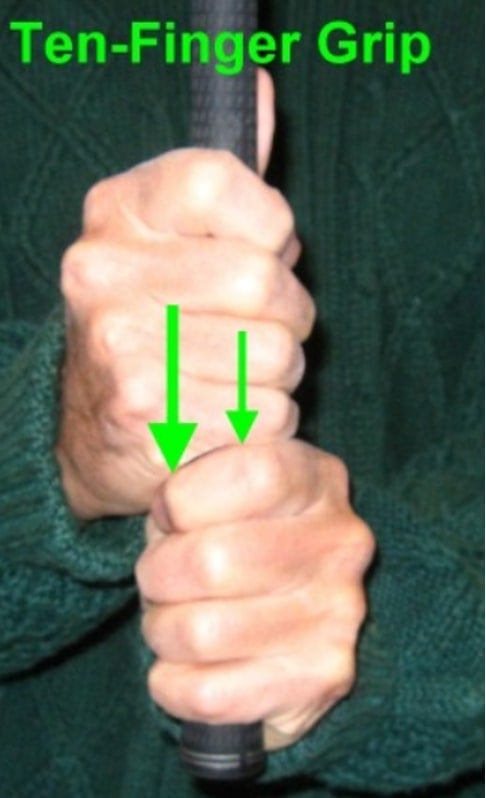 As its name implies, the 10 Finger golf grip means that all ten of the golfer’s fingers grip the club at the same time and with the same amount of grip pressure.

The 10 Finger golf grip has been around since the game was invented back in the 15th century. The ten-finger grip is referred to as the baseball grip by lots of golf instructors in the game today.

The 10 Finger grip is perfect for beginner-level golfers because of its simplicity and comfortability. Lots of golfers believe that the 10 Finger golf grip feels much more natural than the other two popular ways of holding the golf club (the overlapping grip and the interlocking grip).

To try out the 10 finger golf grip, simply imagine that the shaft of the golf club is a baseball bat and grip it accordingly.

Pros of the 10 Finger Golf Grip

There are several distinct advantages to using the 10 Finger golf grip. Here are some of the best reasons to give it a try.

The 10 Finger golf grip is easy for new golfers to learn.

If the beginner golfer has played baseball or softball in the past, they will be able to get comfortable with the 10 Finger grip in a hurry. The 10 finger grip is ideal for all beginner golfers, no matter what age they are.

If you watch the Golf Channel at all, you know there’s an obsession with distance and clubhead speed in the game of golf these days.

The 10 Finger golf grip allows the golfer’s hands, wrists, and forearms to create plenty of leverage during the golf swing. As a general rule, more leverage means more swing speed and the ability to hit the golf ball further.

The 10 Finger golf grip provides a high level of comfort.

There’s virtually no strain put on the wrist or hands because the 10 finger grip is so natural. This means that there is a low chance of injury when using the 10 Finger golf grip.

Cons of The 10 Finger Golf Grip

Though there are many advantages to using the 10 Finger golf grip, there are some drawbacks.

After all, there is no perfect golf grip and every golfer is built differently. Here are some of the cons of using a 10 Finger golf grip.

1. It’s Tempting to Grip the Club Too Hard

Since the 10 Finger golf grip feels so natural, it’s tempting for the beginner level golfer to try to muscle up during the golf swing.

When this happens, the golfer ends up gripping the club way too tight and the hands and wrists can’t fully release through impact.

This can cause direction problems like hooks and slices. It can also limit distance.

2. The Strong Hand May Take Over

For a smooth, fundamentally sound golf swing, both the trailing hand and leading hand must work as a team.

When employing the 10 Finger golf grip, the golfer’s dominant hand may want to take over. When this happens the timing of the golf swing is thrown off in a big way.

3. Too Much Wrist Freedom

Having a certain amount of wrist freedom is a good thing for the golf swing. However, too much wrist freedom in the swing can cause a loss of control (which again can cause hooks and slices).

Like the great Jack Nicklaus has said many times in interviews, “The hands are the swing wreckers.”

Which Pro Golfers Use This Grip?

Though the 10 Finger golf grip is primarily used by beginners, several pro golfers on the PGA Tour utilize this grip.

Here are some of the most famous PGA Tour stars to use the 10 Finger golf grip. This proves that the 10 finger grip isn’t just for new golfers.

Daniel is one of the most accomplished golfers in LPGA Tour history.

She won 33 LPGA Tour events and one major title (1990 PGA Women’s Championship) during her illustrious career. She is also a member of the World Golf Hall of Fame and utilized the 10 finger grip throughout her professional career.

Piercy uses the 10 finger grip and he’s been in professional golf since 2001.

The 42-year old has won four times on the PGA Tour and twice on the Korn Ferry Tour. The Las Vegas native came close to winning his first major championship in 2016 when he finished in a tie for second place in the U.S. Open.

Estes is also a big fan of the 10 Finger golf grip and has been his entire career.

Barr is another pro golfer who uses the 10 Finger golf grip.

Wall played with a 10 Finger grip and did exceptionally well on the PGA Tour.

The former Pennsylvania native won 14 times on the PGA Tour, including a major title at The Masters in 1959.

Wall passed away in 2001 but his legacy lives on in the golf world.

So, Who Is This Grip Best Suited For?

While most golf instructors won’t recommend the 10 Finger golf grip, it remains a great choice for several different types of golfers. Here’s who should give it a shot.

Young kids who are just starting to learn golf should try the 10 Finger golf grip because of its simplicity.

If they are under 10 years of age, any other type of grip is likely to feel uncomfortable to them and cause frustration. At such a young age, let them stick to what is comfortable.

Most women have smaller hands and will find that the 10 Finger golf grip is the ideal choice for them.

The 10 Finger grip will allow most female golfers to hit the ball further than other golf grips due to the extra leverage.

Many players on the LPGA Tour also claim that the 10 Finger golf grip gives them more control of the clubhead throughout the swing.

Since the 10 Finger golf grip feels the most natural, it’s a great choice for seniors or other golfers who struggle with arthritis problems in their wrists and hands.

The other popular types of grips can sometimes lead to joint pain in the fingers, wrists, and hands for older golfers.

4. Anyone With Small Hands

The 10 finger grip is usually best for golfers with small hands.

Folks with small hands often have no trouble controlling the golf club so the added power from the 10 finger grip may be just what the doctor ordered for a more powerful swing.

Who doesn’t love longer drives off the tee?

Other Common Types of Golf Grips 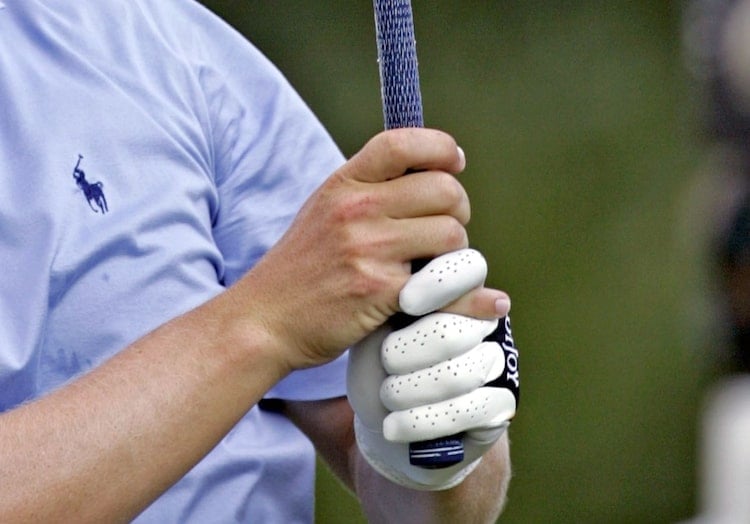 As its name implies, the grip involves interlocking the pinkie finger on the right hand with the pointer finger of the left hand.

Pros of the Interlocking Grip

Cons of the Interlocking Grip

Overlapping Grip (AKA: The Vardon Grip) 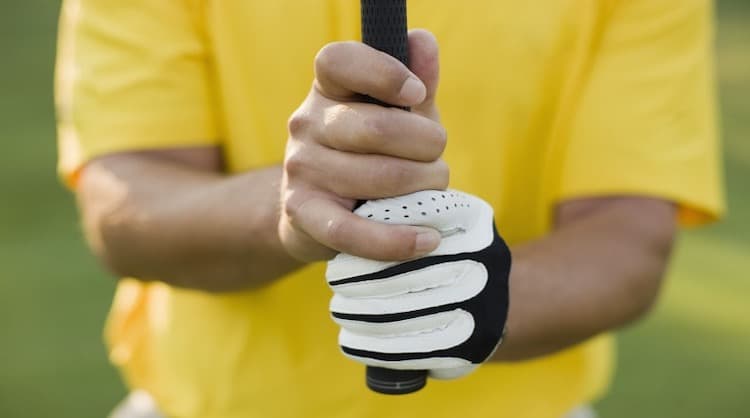 As shown in the above picture, this grip involves overlapping the pinkie finger of the right hand with the forefinger of the left hand.

Pros of the Overlapping Grip

Cons of the Overlapping Grip